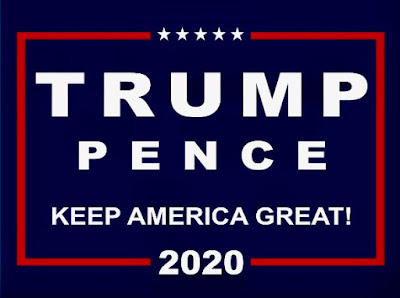 Assuming that you are not a Trump supporter, what would you do if your neighbor put up a sign in the neighbor's own front yard like the one pictured above? According to Rod Dreher, Senior Editor at The American Conservative, here is what one, non-Trump-supporting person did. The non-Trump-supporter wrote her Trump-supporting neighbor a letter, as shown below: 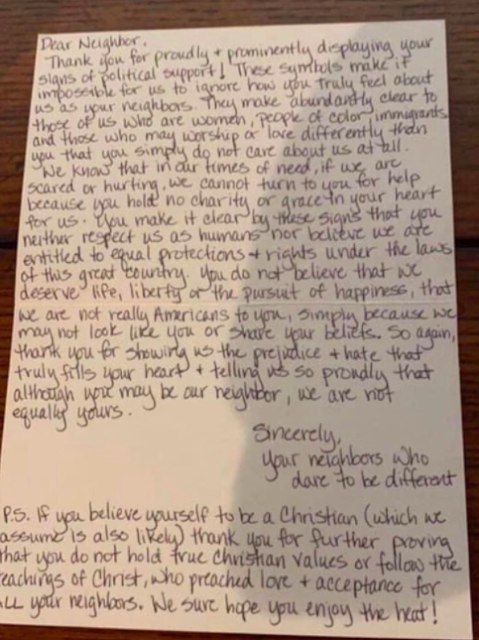 Dreher titles the column in which he denounces this letter, "Here Comes The Liberal Unwelcome Wagon." He is clearly upset:

What a rotten person! Doesn’t even have the courage to sign her name. A conservative friend of mine in suburban NYC said that he could easily see getting a letter like that from someone in his neighborhood. That just boggles my mind. One hears anecdotes about conservatives in blue states who are harassed for bumper stickers on their car, or for in some other way microaggressing against a liberal simply by existing. I live in one of the reddest of states, and this is unthinkable here, from either side....

Is this just something Yankees do? Or liberals do? I don’t get it. What kind of sorry piece of crap person would you have to be to leave a note like that for your neighbor?

Might I suggest that no one should be making any assumptions about what might be called the state of someone's "soul," or the human value of that person, without having obtained (at the very least) some direct and actual experience supporting their judgment.

Dreher is a dedicated Christian, and thinks that the truly spiritual among us ought to be retreating into Benedictine-like communities, so as to avoid all the horrors of the contemporary, godless world. Dreher often quotes Scripture in his columns, so he'll be familiar with Matthew 7:1-3, which reminds us, "Judge not."

That "judge not" advisory is very good advice, if what we are talking about is making a judgment about another person's essential humanity and human value. I do not think that Trump supporters (with whom I profoundly disagree on a political level) are "piece of crap persons." I don't think that they are "rotten," just because they support our current president. I also don't think that there is "no charity or grace in their hearts." I hope that those who do support the president are going to give me the same benefit of the doubt.

So, what would I do if someone on my block put up a "Trump-Pence" sign in their front yard?

Hopefully, I would go out of my way to try to talk to them, to get their point of view and to educate them to mine. This election coming up is of critical importance. None of us should go into it questioning the essential humanity of those who will vote differently from us. If we do, we are all going to lose.

I am sticking with Martin Luther King, one of those "Five Guys" I wrote about not so long ago: