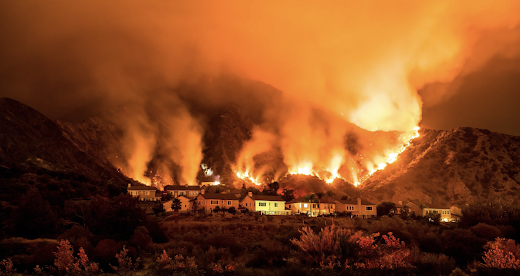 This picture, of the Ranch Fire, in Azusa, California, is one of several horrific photographs included in an article that ran in The New York Times Magazine, and that was published online in collaboration with ProPublica. This was the second article in a series that began with "The Great Climate Migration."

The first article, which I have just linked above, took a global perspective. The second article, from which the picture comes, is titled, "How Climate Migration Will Reshape America." It was published on September 15, 2020, and it focuses on the United States. The article is extremely long - but worthwhile reading! I am providing a short sample, below. I encourage those reading this blog posting to read the article in its entirety.

Let’s start with some basics. Across the country, it’s going to get hot. Buffalo, New York, may feel in a few decades like Tempe, Arizona, does today, and Tempe itself will sustain 100-degree average summer temperatures by the end of the century. Extreme humidity from New Orleans to northern Wisconsin will make summers increasingly unbearable, turning otherwise seemingly survivable heat waves into debilitating health threats. Fresh water will also be in short supply, not only in the West but also in places like Florida, Georgia and Alabama, where droughts now regularly wither cotton fields. By 2040, according to federal government projections, extreme water shortages will be nearly ubiquitous west of Missouri. The Memphis Sands Aquifer, a crucial water supply for Mississippi, Tennessee, Arkansas and Louisiana, is already overdrawn by hundreds of millions of gallons a day. Much of the Ogallala Aquifer — which supplies nearly a third of the nation’s irrigation groundwater — could be gone by the end of the century.

It can be difficult to see the challenges clearly because so many factors are in play. At least 28 million Americans are likely to face megafires like the ones we are now seeing in California, in places like Texas and Florida and Georgia. At the same time, 100 million Americans — largely in the Mississippi River Basin from Louisiana to Wisconsin — will increasingly face humidity so extreme that working outside or playing school sports could cause heatstroke. Crop yields will be decimated from Texas to Alabama and all the way north through Oklahoma and Kansas and into Nebraska.

The challenges are so widespread and so interrelated that Americans seeking to flee one could well run into another. I live on a hilltop, 400 feet above sea level, and my home will never be touched by rising waters. But by the end of this century, if the more extreme projections of 8 to 10 feet of sea-level rise come to fruition, the shoreline of San Francisco Bay will move 3 miles closer to my house, as it subsumes some 166 square miles of land, including a high school, a new county hospital and the store where I buy groceries. The freeway to San Francisco will need to be raised, and to the east, a new bridge will be required to connect the community of Point Richmond to the city of Berkeley. The Latino, Asian and Black communities who live in the most-vulnerable low-lying districts will be displaced first, but research from Mathew Hauer, a sociologist at Florida State University who published some of the first modeling of American climate migration in the journal Nature Climate Change in 2017, suggests that the toll will eventually be far more widespread: Nearly 1 in 3 people here in Marin County will leave, part of the roughly 700,000 who his models suggest may abandon the broader Bay Area as a result of sea-level rise alone.

I read the article on the day it appeared, and I had what I think might be an unusual reaction. The article dramatically points out the horrors that are just over the horizon. In fact, where I live, in Santa Cruz County, California, thousands of community members have already been experiencing these horrors personally, as local wildfires have destroyed their homes in Last Chance, Bonny Doon, and the San Lorenzo Valley.

One very reasonable reading of what Abrahm Lustgarten has to say is that "we're doomed." Considering our current, dysfunctional response to the Covid-19 global pandemic, there seems to be little reason for any optimism that we can somehow avoid the massive, climate-caused destruction that we know is coming - that we can already see, in fact, coming like wildfire, over the hill.

Yet, I had virtually the opposite reaction. There is no doubt about the daunting - almost insurmountable - challenges ahead, which are the result of heedless, human-caused global warming. Surely, despair is a reaction that does makes sense! What struck me, though, was the fact that the challenges were so great, so serious, that it is now impossible for us to ignore the most important fact of our human existence. We are not a bunch of isolated individuals, separated by race, gender, nationality, income, and education; we are in this life together.

There is no way our nation - and indeed the world - will be able to survive what is coming (what is already underway) without a fundamental restructuring of our lives together, what I call "politics." All the divisions, from income inequality, to racial injustice, to gender discrimination, to you name it - ALL of them - all of these divisions which we have sanctified as inevitable and normal, must be swept aside. I think that is what is coming. That is what must come.

Bob Dylan has a wonderful song, Mississippi, which has these lines in its final verse:

Everybody movin’ if they ain’t already there
Everybody got to move somewhere
Stick with me baby, stick with me anyhow
Things should start to get interesting right about now

Everybody is going to have to move. But we can do it. Despair is not our only choice. There is such opportunity, adventure, and enterprise ahead. Really! I mean it.

Things should start to get interesting, right about now!