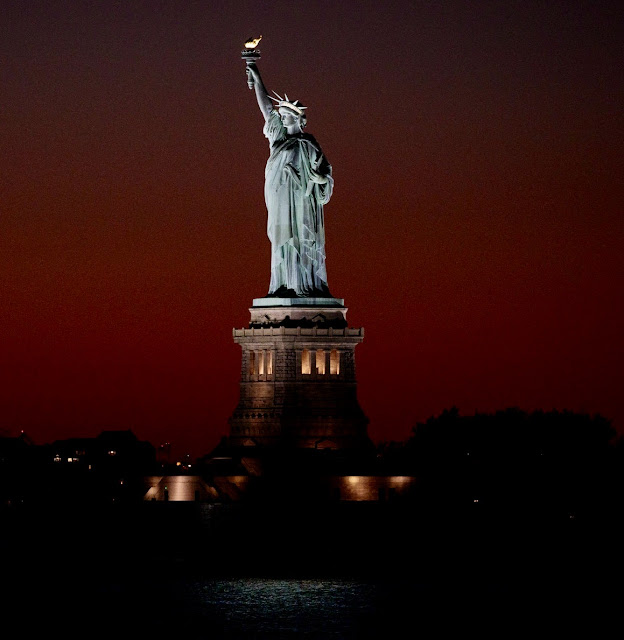 David Brooks, columnist for The New York Times, wrote an opinion editorial on May 22, 2020, that featured the picture above. It was titled, "The First Invasion of America." Here is an excerpt:

To be born American was to be born boldly individual, daring and self-sufficient. “Trust thyself: Every heart vibrates to that iron string,” Ralph Waldo Emerson wrote in an essay called, very Americanly, “Self-Reliance.”

To be born American was to bow down to no one, to say: I’m no better than anyone else, but nobody’s better than me. Tocqueville wrote about the equality of condition he found in America; no one putting on airs over anyone else. In 1981, Samuel Huntington wrote that American creed was built around a suspicion of authority and a fervent rejection of hierarchy: “The essence of egalitarianism is rejection of the idea that one person has the right to exercise power over another.”

I found it all so energizing. Being an American was not just a citizenship. It was a vocation, a call to serve a grand national mission.

Today, of course, we understand what was wrong with that version of American history. It didn’t include everybody. It left out the full horrors of slavery and genocide.

But here’s what has struck me forcefully, especially during the pandemic: That whole version of the American creed was all based on an assumption of existential security. Americans had the luxury of thinking and living the way they did because they had two whopping great oceans on either side. The United States was immune to foreign invasion, the corruptions of the old world. It was often spared the plagues that swept over so many other parts of the globe.

Brooks is certainly right that Americans have generally had the sense that we are "safe," because we are protected by those two oceans. The pathological fear of immigration felt by some portions of the population, which is another less-than-estimable part of American history, is based in part on the fear that the nation's protective borders can perhaps be penetrated, making us vulnerable.

Brooks thinks a change is going on, with the current global pandemic playing a major role. Past understandings are being modified, and Brooks' prediction is that "economic resilience will be more valued than maximized efficiency ... The local and the rooted will be valued more than the distantly networked." "Community" will be valued over "individualism, [and] embeddedness over autonomy."

Brooks speaks, always, as an "observer," trying to see what will happen to us. As "actors," we know that we actually create the reality we inhabit, ourselves. What we think will be possible - and thus what is possible - depends, of course, on our sense of who we are and where we are. We have been lucky in being able to grow up with those two "whopping great oceans" to the East and West, but we may be starting to get the sense that it is not those "borders" that provide us security, but that security is something we provide for ourselves, as we act together. If we are changing our way of thinking, to understand that our "security" comes from our commitment to one another, then this is an evidence that we have turned an important corner. The latest invasion that has come our way is the stimulus that can help us to discover a whole new world.

That "New World" thing should be pretty familiar. Americans have some experience with that, and this time around, let's not leave anyone behind, as we retool that Declaration that set us off the first time. Those truths are still "self-evident," that all persons are created equal, with certain inalienable rights: life, liberty, and the pursuit of happiness.

We were lucky to learn it, early on, and there is no reason to forget that, now!