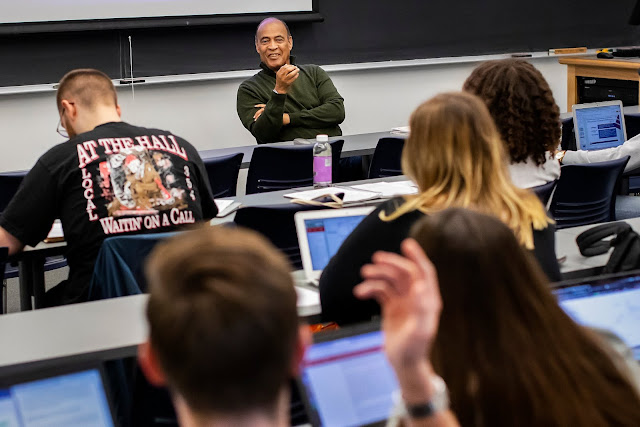 Pictured at the front of the class is Dr. Adolph Reed, Jr. Reed is an Emeritus Professor of political science at the University of Pennsylvania. He specializes in studies of issues of racism and U.S. politics. Reed has taught at Yale, Northwestern, and at the New School for Social Research. He has written extensively on racial and economic inequality. Reed is a contributing editor to The New Republic, and he has been a frequent contributor to The Progressive and The Nation and other leftwing publications. He is a founding member of the U.S. Labor Party He was a Bernie Sanders supporter during the recent primary elections.

You might think, given this background, that Reed would get a pretty positive reception at a meeting of the New York City Chapter of the Democratic Socialists of America. Well, he never got the chance to speak!

Reed, it appears, at least according to The New York Times, happens to believe that "the left's intense focus on the disproportionate impact of the coronavirus on Black people" is counterproductive, in that it "undermines multiracial organizing." It is Reed's view, apparently, that such multiracial organizing is critically important as a way to move the nation towards health and economic justice.

Reed might be right (or he might not be right) about this particular viewpoint, but if you were a member of the New York City Chapter of the Democratic Socialists of America, wouldn't you want to hear what Reed has to say about this?

Apparently not! As reported in the Augsut 15, 2020, edition of The New York Times, after an invitation was extended to Dr. Reed, to speak to the DSA Chapter during a Zoom call meeting, outrage within the Chapter caused the invitation to be withdrawn. The title of The Times' article, which is worth reading if you can slip past the paywall, was "A Marxist's Views on Race and Class Expose a Rift Among Socialists."

Frequent readers of these blog postings will probably remember the formula that I suggest is the best way to think about how our government works - or should work:

We govern ourselves by following various "laws," or "rules," which tell us what we have decided we should do. "Law," however, is never preordained. "Law" is the product of "Politics," which requires robust debate and discussion, as we collectively try to figure out the best rule to make for ourselves. Without that discussion, without that conflict, controversy, and compromise, we are not - collectively - engaging in the process we call "democratic self-government," because that process requires that we all be involved. A group that doesn't want to discuss differences, and different approaches, may not even realize it, but such a group really just wants to impose its ideas on everyone else. That is not the "democratic" way.

When we disagree, and when we think we might disagree, here's the right response:

Let's Talk About It