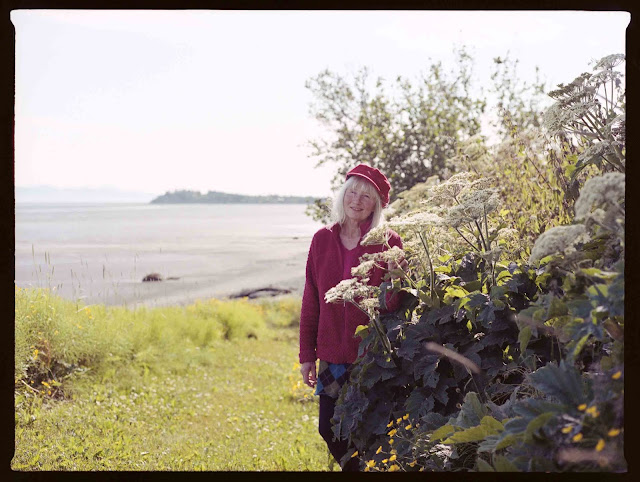 On July 15, 2020, The New York Times wrote about Mossy Kilcher. who is pictured above in a contemporary photo. Kilcher is from a pioneer family, and grew up on a homestead in the wilds of Alaska. She is now seventy-eight years old. Kilcher made an album of songs about Alaksa in 1977, which she entitled, "Northwind Calling."

It appears that a few copies of that original CD may still be available - at least, that was the situation on the date The Times' story ran. A number of Kilcher's songs from the album are definitely available on YouTube. I have included a link to "Going To Blow," as one sample:

Mossy Kilcher is now ready to release forty new songs - all about Alaska - produced by her niece Jewel Kilcher, who is, herself, a celebrated singer-songwriter, musician, producer, actress, author, and poet.

In her first memory, Mossy Kilcher, then 3 years old, is standing on a windswept Alaskan beach in 1945, holding her father’s hand as thundering waves crash at their feet.

Surrounded by rugged cliffs and the seemingly endless expanse of Kachemak Bay, she realizes for the first time that any of this can kill her ...

Kilcher’s father, Yule, had fled Switzerland and World War II to start a communal utopia on the United States’ wilderness frontier with his wife, Ruth, an aspiring opera singer. Mossy (born Mairiis), the oldest of their eight children, remembered being terrified by the rugged terrain of their 160-acre spread that day. Then she heard the long-tailed duck’s affirming song.

In the 75 years since Kilcher first heard that call, integrating with and observing the Alaskan wilderness — and becoming its international emissary — have become her life’s work. In the 1970s, she helped build an intentional community near Anchorage and fought to protect the state’s splendor as the oil industry encroached. Since the ’80s, she has owned Seaside Farm, where she guided guests on dayslong horseback trips for a dozen years. She has obsessively documented the songs of the state’s bountiful birds, donating her archive to the ornithological library at Cornell University and lecturing about them at the Smithsonian’s National Zoo.

I thought the story about Kilcher was pretty extraordinary, and I encourage anyone reading this blog posting to track it down, and to read it in its entirety. This may or may not be easy, depending on how The Times' paywall protection may affect that effort.

I wanted to mention the story on this blog because of the statement below, a quotation from The Times' story. As I look ahead, I am pretty sure that things are "going to blow," meaning that we are facing a fierce storm approaching in the years just ahead.

The Natural World can definitely kill us, so what Kilcher says she realized at the age of three we need to remember now:

Kilcher’s songs rest on the realization she’d had at 3 — that, to survive, she’d need to cooperate with nature, not conquer it, an empathy often at odds with the pioneer mentality. She sang of prowling coyotes and migrating birds like trusted friends. “The land was here before us; it is indigenous,” she said. “You learn to live with your environment. It doesn’t have to be a big struggle.” (emphasis added)