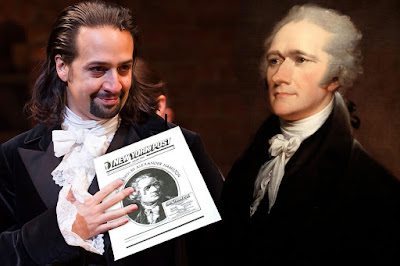 Lin-Manuel Miranda (to the left, above), was inspired by Alexander Hamilton, the 2004 biography by Ron Chernow. I, too, was inspired by Chernow's book, all 730 pages of it, not counting notes and the index.

Not long ago, I put in a pitch for history in general. Chernow's book is a great example of how an understanding of our past can be revealing of our present. If you think that there is something new and unprecedented in our current political life, dominated by vicious political slanders and partisan allegiences, Alexander Hamilton will set you straight. Things were at least as bad then, as now. It is fun to read about it, in a way, and to  compare the situation in Hamilton's time with our present day situation, and to agonize about whether our nation will survive our present political polarization as the nation survived the violent political polarization and partisanship of the 1790s. Reading the history does allow one to see that the nation has managed to surmount a profoundly diseased and disastrous politics before. We have some good reason to think that we can do that again!

Right after reading Chernow's book, I came across an essay by Roger Berkowitz, the Academic Director of The Hannah Arendt Center for Politics and Humanities at Bard College. As regular readers of this blog know, I am a great admirer of Hannah Arendt, and I particularly love her book On Revolution. That book gives pretty good grades to the American Revolution, without exonerating the nation for its foundational racism, and for the "original sin" of its commitment to slavery and the extirpation of Native Americans.

Berkowitz' essay, which I came upon by chance, turns out to be Chapter One of a book entitled, Artifacts of Thinking: Reading Hannah Arendt's Denktagebuch. If that sounds pretty "academic," it is, but that first chapter I read has a title without any German words at all, and it also has something important to say. That Chapter One is called: "Reconciling Oneself to the Impossibility of Reconciliation."

The Berkowitz article outlines Arendt's formula. She says that we must realize that we do not agree, that we have different ideas, and that some of us have done evil and terrible things. Then, after recognizing these actual facts, and not trying to deny them, or to pretend that they don't exist, we must decide that we will "love the world" anyway.

The challenge of reconciliation is to love the world as it is, that is, as potentially irreconcilable and inclusive of evil. It is well known that Arendt considered calling the book that would become The Human Condition by the title Amor Mundi - For the Love of the World. In 1955, there are at least three entries in the Denktagebuch dedicated to Amor Mundi. The first asks simply: "Amor Mundi - Why is it so difficult to love the world?" The answer is clear enough: anti-Semitism, racism, totalitarianism, poverty, corruption, and a feeling of utter powerlessness to make change. What reconciliation and understanding require is a commitment to politics and plurality that can come about only through a dedication to the world as it is.

The title under which I write these blog postings, "We Live In A Political World," does assert that we must commit ourselves to "politics," and to the conflict and controversy that arises precisely because of the "plurality" that is the inevitable definition of our human situation. We are different. VERY different, with different backgrounds, ideas, and aspirations, and yet we are in this world together. Only a dedication to politics, as a means and mechanism to reconcile our "irreconcilable differences," can make it possible for us to defeat the very evils that make it so hard for us to enter into the love of this world. This world, our human world, is a political world, and that means that we must engage in the political debate, discussion, controversy, conflict, and compromise by which we can, in fact, "reconcile the irreconcilable."

From Hamilton's time to our own, the situation has remained the same. But now, the stakes are higher. Anyone who is paying attention knows that we must come to love this world, with all its contradictions and differences, in all its plurality, and find ways to overcome our differences together. If we don't....

If we can't be reconciled - or if, more properly, we don't choose to be reconciled - then we aren't going to have a world to love, because our human world will be burned, buried, flooded, and bombed, and we will kill ourselves all in the name of the differences we claim are irreconcilable.

When they are not.

Reconciliation is the task that is set before us all. It is the "political" work in which we all must be engaged. And it is right now that we must learn to love this world, and to love its plurality more than we treasure up our differences. To be reconciled with one another we must recognize and admit all the differences that divide us; we must acknowledge and recognize the facts of past evil deeds, whose impact continues into this present time; we must decide to overcome our repugnance and revulsion at the differences between us, and to recognize and be reconciled to what we share in common, our common world.

This world into which we have been so mysteriously born!