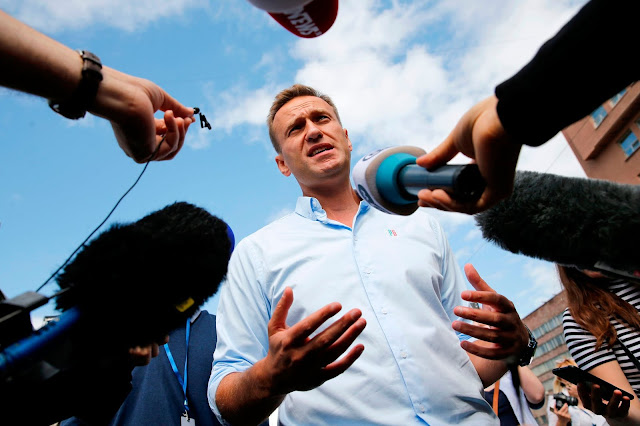 Pictured above is Aleksei A. Navalny. Navalny is a Russian opposition politician and anti-corruption activist, who has been outspoken in his criticism of Vladimir Putin, the current President of Russia. This picture was taken during better times for Navalny. It shows him at a campaign rally in Moscow, last summer. Today, Navalny is fighting for his life in a German hospital, having, apparently, been poisoned by Russian agents.

Of course, Russian officials dispute that, suggesting, even, that Navalny may well have "poisoned himself."

You can read about this case in "The Spin From Moscow," which is an article published on September 4, 2020, in The New York Times. Of course, to read the article online you will have to penetrate The Times' paywall. If you do, you will find the following two paragraphs, which attracted my attention when I read the article in the hard copy edition:

To Russian officials and commentators on state news media, anxious to deny any Kremlin role and [to] offer a wide range of alternative theories, the Germans had poisoned Mr. Navalny, or he had poisoned himself, or he was not poisoned at all.

Though dismissed by critics of the Russian government as dust thrown up to cover the truth, such flurries of evidence-free theories have become a standard response to accusations of Moscow’s malfeasance, whether it is election meddling, military interventions, assassinations or the repression of the domestic opposition (emphasis added).

Our own politics, as I presume everyone recognizes, is also plagued with "evidence-free" theories in abundance, all of them intended to advance one or another political agenda. To cite to that September 4, 2020, edition of The Times, for example, consider its front-page story, "Trump's Trusted Ploy: Spreading Distrust." The article documents the many "evidence-free" explanations that our current president has advanced to defend himself from criticism, or to attack others.

There are many newspaper and magazine articles about this phenomenon. It is an acknowledged characteristic of our contemporary politics that "conspiracy theories," and claims with no evidence to support them whatsoever, are now regularly discussed as though they were presenting new insights into what is "really" going on.

An opinion column that also appeared in The Times last Friday, by economist Paul Krugman, was titled, "Trump and the Attack of the Invisible Anarchists." As Krugman tries to contrast reality with "evidence-free" claims about what is actually real, propogated by our current president, he talks about one of his recent walks across town in Manhattan:

On Thursday morning I walked across much of Manhattan and back again. (Why are all the doctors’ offices on the East Side?) It was a beautiful day, and the city looked cheerful: Shops were open, people were drinking coffee in the sidewalk seating areas that have proliferated during the pandemic, Central Park was full of joggers and cyclists.

But I must have been imagining all that, because Donald Trump assures me that New York is beset by “anarchy, violence and destruction.”

It is easy to think that the delusions and extravagant claims that our current president is trying to palm off as truth are something that we can laugh at and then dismiss. Let's not succumb to that temptation, or trivialize efforts to inject "evidence-free" claims into our political life. When politicians routinely start trying to get us to accept "evidence-free" assertions, it is no laughing matter, and I am sure Aleksei Navalny would agree.

Democratic self-government cannot survive unless we demand, in our debate and discussion, that claims and assertions be tethered tightly to facts, to evidence, and to "the truth." If we don't demand and insist on an effort to base our decisions on "truth," making that search for "truth" a prerequisite in political discussion, then "power" will end up being the only test of what will be done.

It is not always easy to get at the "truth." In fact, we may never get there, in any ultimate sense. However, getting to "the truth" is what we must insist upon, and what we should all be trying to do. To find "truth," and especially to get others to recognize it, we must sift, survey, and examine the "evidence." The "evidence" may be contradictory, and claims to know "the truth" are always suspect. However, claims to have identified "the truth" or "reality" are never more suspect then when they are based on "evidence-free" statements. Claims of that kind are, as we ought to recognize, evidence in and of themselves that the assertion is without merit. You don't have to be a "scientist" to demand that there be some demonstration, by way of evidence, that a claimed reality or truth actually exists.

There is a type of politics that says that since it is almost impossible to know "the truth," in any ultimate sense, "the truth" doesn't really matter. You probably remember Pontius Pilate. His famous question, "What is truth?" was Pilate's claim that he shouldn't even try to find out. The reputation of Pontius Pilate is not good - and for a very good reason. We may be mistaken about it, but we need to seek, always, to find what is "true," and what is "real."

People (and politicians) make mistakes and misstatements all the time. They are sometimes (and perhaps often) "wrong" about what is "true" and what is "real."

However, we need to beware of any politician, political movement, or political party that thinks that "truth" doesn't matter, and that "evidence-free" assertions are acceptable.

Heads up, folks! That's where we are, right now.

Let's not crucify our system of democratic self-governent on an "evidence-free" cross!