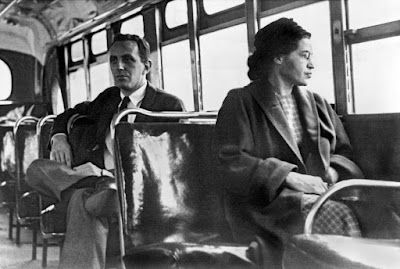 Rosa Parks was prepared for that day, December 1, 1955, on the bus in Montgomery, Alabama. She had gone to the Highlander Folk School, where Martin Luther King Jr. learned nonviolence. She was the secretary of the NAACP in her community. But at the moment she refused to move to the back of the bus, as blacks were required to do, she had no assurance that the theory would work, that the strategy would succeed, nor that her friends would be there with her in the aftermath of that decision. It was a lonely choice made in isolation, but it helped to change the lay and the law of the land.
I’ve often asked myself how people find the courage to make a decision like that, when they know that the power of the institution is going to come down on their heads, when it could easily lead to loss of status, loss of reputation, loss of income, job, friends, and perhaps even meaning. The answer comes from studying the lives of the Rosa Parkses and the Václav Havels and the Nelson Mandelas and the Dorothy Days of this world. These are people who understand that no punishment that anybody could lay on us could possibly be worse than the punishment we lay on ourselves by conspiring in our own diminishment, by living a divided life, by acting and speaking on the outside in ways not consonant with what we know to be true on the inside.
“The Grace of Great Things”
Parker J. Palmer, September 1998

The Highlander Research and Education Center was (and is) a "school" for activists. I believe, if we want to have a chance to reverse the current momentum towards the apocalypse, that we need many more such academies teaching effective activism - and particularly "non-violent" activism. During the Vietnam War, "teach-ins" helped provide both the intellectual analysis and and practical advice that was needed to mobilize the country against the war.

Today, we need to "go to school" on global warming, climate change, and the political tactics and actions that can prevent what will certainly otherwise happen.

Let Rosa Parks, and the Highlander School, inspire us now.