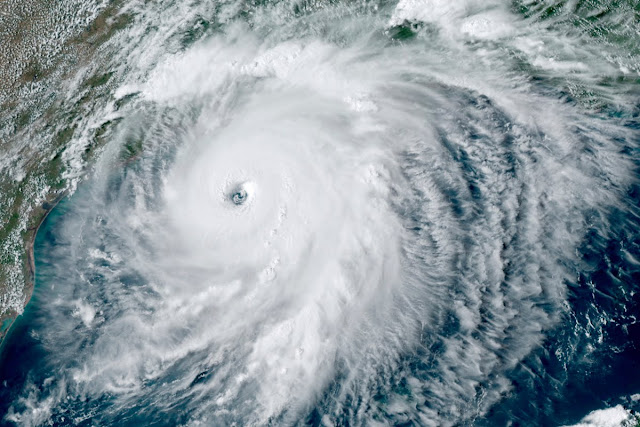 Yesterday, I referenced articles that suggested that a volcanic eruption, and/or a smallpox pandemic, might have brought down the Roman Empire. Mother Nature affects human history; that was the message.

Immediately after finishing that blog posting, I came across an article published in Rolling Stone Magazine on August 27, 2020. That article, by Jeff Goodell, also suggests that "Mother Nature" is affecting our human world. The article is titled, "Climate Apocalypse Now." It is certainly an article worth reading.

Goodell suggests that human-caused global warming is poised to bring an end to human civilization. "Maybe it’s just a failure of human imagination," he says, "to understand what is coming."

While Goodell might be right about that, it could also be that we are so afraid of what we actually do understand is coming that we have become paralyzed by fright, both individually and collectively.

Goodell's article links the climate apocalypse to the 2020 presidential election. Here is how he puts it:

The climate crisis was not created by Trump. It was created by the industrialized nations of the West who burned fossil fuels to build cities, fight wars, and grow rich. For a long time, we were blissfully ignorant of the consequences of that fossil-fuel binge. But now we are not. And now we are at a point where every ton of CO2 we dump into the atmosphere creates a hotter, riskier, more dangerous world. And the man who could lead us out of this, who could begin a journey of carbon redemption, just doesn’t give a shit.

Maybe the real message that Mother Nature is sending with these storms and fires in the midst of the Republican National Convention is not to Trump, but to us. And it says this: You can have four more years of Trump, or you can have a habitable planet. But you can’t have both.

There is good reason to highlight the importance of the upcoming election, but replacing our current president won't actually solve our problem. No matter which way the election goes, we are going to have to make profound changes, both individually and collectively.

If we don't, we will perish.

Casting the right vote? That is definitely important! But making fundamental changes in our human relationship to the World of Nature is what is actually needed, and that means making big changes in every aspect of how we live.

Let's not be too afraid. Making the changes we need to make could be really exciting!