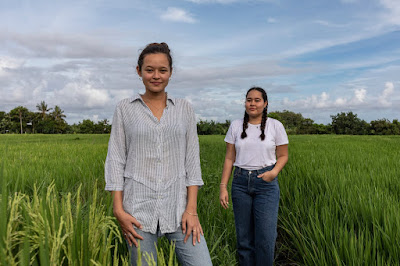 If you are able to make it past the paywall (no guarantees), you can click the link to read an inspiring story from the July 4, 2020, edition of The New York Times. The article is titled, "After Fighting Plastic in ‘Paradise Lost,’ Sisters Take On Climate Change."

A trash crisis in Bali? Who would have thought! The pictures are pretty horrendous.

The story recounts how Isabel Wijsen (foreground) and Melati Wijsen (background), when they were twelve years and ten years old, respectively, organized a nationwide "ban plastic bags campaign." Seven years later, the sisters have become "local heroes" and have won international acclaim for their campaign, which ultimately resulted not only in massive beach cleanups, but in a ban, in Bali, on plastic bags and other such items that are intended for single use.

What drew me to the article was this statement, featured in a pull quote, right under the picture above:

Realizing the truth of this observation, will it be easier for young people than for we who are older to overcome the inertia of past practices, and to create a new reality?

We had all better hope so!