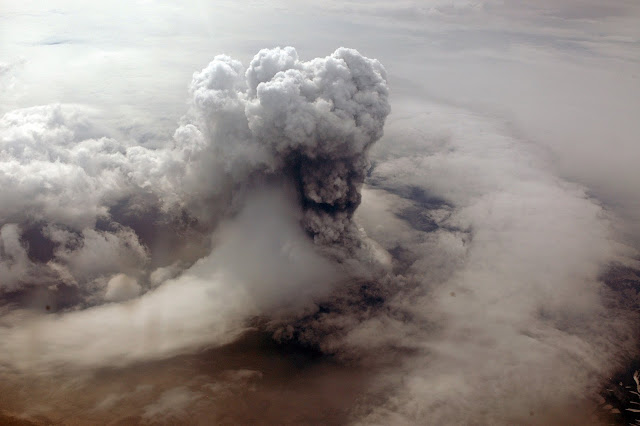 Pictured is Okmok, a volcano in Alaska. An article in The New York Times suggests that the eruption of this volcano in the first century B.C. helped bring down the Roman Republic. But maybe it wasn't the volcano at all (or maybe it wasn't only the volcano). Maybe a smallpox pandemic also played a key role in ending the reign of Rome.

It would be a rather romantic notion to think that Nature might knowingly play a major role in human history, with Nature intervening intentionally to affect what happens within the human and "political" world. This idea did spring to my mind after I read the articles I have linked above, even as I realized that to entertain this idea would be significantly to amplify the Gaia hypothesis, also known as the Gaia theory or the Gaia principle. That Gais hypothesis is already beyond what most scientists will countenance.

The Gaia hypothesis proposes that "all organisms and their inorganic surroundings on Earth are closely integrated to form a single and self-regulating complex system, maintaining the conditions for life on the planet." I confess that I am rather attracted to the Gaia hypothesis, which is a justification for thinking that "Mother Nature" is more than a metaphor.

Of course, despite my attraction to it, I do understand that there is a good deal of "romantic" speculation in the Gaia hypothesis, which runs contrary to a strictly materialistic and scientific explanation of how the world works. Under my stern exterior, I guess, beats the heart of a romantic!

And how much more romantic it would be to extend the Gaia hypothesis, and to think that Nature actually undertakes very specific and intentional actions to influence human history, again, with the idea of "maintaining the conditions for life on the planet." This idea would lead to the thought that the coronavirus pandemic might be part of a plan by Nature to reduce human population growth, and to disrupt the kind of economic "development" that is rapidly leading to the current global warming disaster, which is leading not only to climate change, but to what is being called The Sixth Extinction. It could even be that there are future pandemics still to come, with the idea being that Nature will simply insist that we "keep it down," with respect to our human actions that threaten life on Earth.

It is possible, I do admit, to push "romance" beyond the limits of rationality, and I don't really want to urge either the traditional Gaia hypothesis or the "amped-up" version that suggests that Nature is actually observing human history, and intervening, from time to time, to try to correct human error. However, I do want to make an observation that I think is accurate, and important.

"Possibility" is a category that I contend is critically important when we consider what we are able to do in our human, "political" world. The "laws of Nature," I suggest, are perfectly "descriptive" of what must happen, and thus actually exclude the idea that they can be broken. Human laws are just the opposite. Far from "describing" what must and will happen, human laws are our written-down "prescriptions" by which we tell ourselves what we believe we should do (not what we must do). In our human-created world, "anything is possible."

"Anything" is not possible in the World of Nature, but the natural world can be "surprising." Huge natural events, including earthquakes, volanic eruptions, massive wildfires, and pandemics, can seemingly "come out of nowhere," and can swiftly transform the world in which we most immediately reside, even with civilization-ending results.

Such, apparently, was the fate of the Roman Republic after Okmok erupted, and this ability of Nature to "surprise" us is good to keep in mind! The heating of the arctic this summer is likely to portend that a "tipping point" is near, and that the global warming that has been stimulated by human action, by the combustion of hydrocarbon fuels, will soon spin completely out of control and bring human civilization to an end. Still.... who knows what will happen in the World of Nature? The "pandemic lockdown" that we instituted to fight the spread of the coronavirus demonstrably slowed the emission of greenhouse gases, if only temporarily, and maybe another volcanic eruption will provide some sort of reprieve.

It would romantic, as I have said, to think that there is a Mother Nature who cares about us, and who will intervene for our ultimate good - sending timely volcanic eruptions (or even pandemics) to save us from ourselves. I would suggest that we should not count on romantic notions. While having such thoughts can be a momentary consolation, what we actually know is that we can change what we do.

That's an observation I think is important, and that is where our focus needs to be, right now. And NOW, incidentally, is exactly when we need to make those changes!