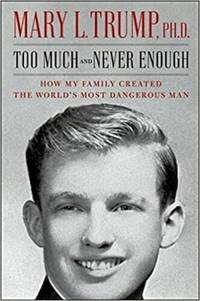 I have just read the Mary Trump book. I recommend it - and not necessarily because of its immediate political implications.

This book is not, surprisingly, mostly about our forty-fifth president, Donald J. Trump, who is Mary Trump's uncle. Although our president's picture is on the cover of the book, along with a description of him as "the world's most dangerous man," the book is mostly about the profound pathology that has affected every person in the family of Fred Trump, the father of our current president.

While Mary Trump herself is, quite understandably, portrayed as a sympathetic character, it appears to me that no one in the family has escaped from the horrifying psychological damage inflicted on family members by Fred Trump. The pathology outlined is so horrific that I found it impossible to put the book down, once I began it.

Reading this book, in fact, was a lot like looking at the video of the murder of George Floyd. Could this really be happening? Could such callousness and detachment from every positive human emotion actually be an accurate description of what went on in that family? Could it really be true that a police officer could, knowingly, deliberately, kill a man, on camera, with no sign of contrition or concern?

Knowing how pervasive evil can be, how it can work its way into our existence so we begin to accept it, is a hard lesson to learn, but it is an important one.

In the case of George Floyd, the video was so horrifying that it has been almost impossible to watch, but we have needed to understand just how deep the evil of racism has penetrated into our existence. The video did make that clear. Let us hope that having seen what lies beneath the exterior, and having realized the extent to which racism has penetrated to the core of our nation, we will now be committed to purge our nation of that evil, as we truly must do, if we are to survive. If we are to continue as a nation, we must succeed in exorcising the evil of racism from the deep levels to which it has penetrated. We must truly eliminate it from our system, and that is exactly what the demonstrations all over the country are proclaiming.

There is something similar happening with the Mary Trump book. Her book is a revelation of a profound evil that has pervaded and polluted our nation - and not just people named "Trump." Money, and the love of money as the ultimate aim of life, has penetrated into every nook and cranny of our national life - including, very notably, our politics - just as it pervaded the lives of the members of the Trump family. A willingness to sacrifice all that is generous, and to set aside our humanity for money and power, has insinuated itself everywhere.

Mary Trump's book is a warning. The pathology of endless greed will destroy our humanity from within, and this pathology is not, unfortunately, limited only to the family of Fred Trump. It is not a pathology that is confined to our current president. Elected officials, and all of us, have watched as the president has put children in cages at the border, and as he has undermined the integrity of the natural world, and as he has denied assistance to working families everywhere. Our national pathology is exactly the pathology portrayed in the Mary Trump book about the pathology of her own, individual family. We watch it happen and allow the horror to continue.

Oh, our president has been profundly afflicted, of course. I do think that Mary Trump is correct in identifying him as "the world's most dangerous man." But read this book for its larger message. Flushing out and eliminating the pathologies of racism and greed are tasks in which we must all be engaged, because we are all implicated in these pathologies that put our common world in peril.