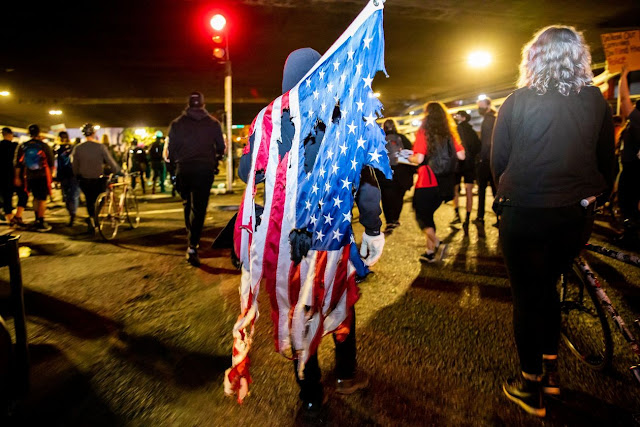 A couple of days ago, I was holding forth on the topic that when we see some "warning signs" that fascism is coming forward around the bend we should not, thereafter, immediately leap to the conclusion that fascism is in fact already here, or that it is anywhere near likely or inevitable.

It is that "self-fulfilling prophecy" thing that I am worrying about, and that phenomenon is hugely indebted to our willingness to think of ourselves, mainly, as "observers" of reality, instead of keeping in mind that it is we who create the realities we inhabit.

At any rate, concerns about the growth of authoritarian tendencies in the United States seem to be multiplying. More and more people are "having them dreams." More and more people are worrying about fascism's incipient arrival, including a fellow named Daniel Schwammenthal, who characterizes himself as a "worried European friend." If you click that link, and can slip by what I am pretty sure will be a paywall of some kind, you can read the entire column in which Schwammenthal outlines his worries. I'll summarize what he says here, though, just in case you can't get access to the column in its entirety.

Schwammenthal's column, which appeared in the July 29, 2020, edition of The Wall Street Journal, makes a case for American "exceptionalism."

I learned to cherish the U.S. long before I had the privilege to live and study there. History can be very personal. What Madeleine Albright called the “indispensable nation” meant the difference between life and death for my family. I was brought up in the firm knowledge that had it not been for those unimaginably brave American boys storming the beaches of Normandy, I wouldn’t have been born, and my parents and the rest of my people would have been extinguished. No doubt I’m leaving out entire libraries of nuance, but that is the quintessential truth.

America today is what it has always been: a flawed society, like all others, but also a unique force for good in the world. No other multiethnic, multireligious society can credibly claim to be more democratic, more prosperous and more just than the U.S.

This is giving the United States a lot of credit (and deservedly, I think). However, Schwammenthal is, as the column headline said, "worried."

America can’t remain the leader of the free world if it is itself no longer free. To be the guarantor of Western security requires military and economic power, but also a sense of mission. And right now Americans are committing mass character suicide. If the country goes beyond acknowledging that racism and inequality persist and must be fought, and instead convinces itself that it’s inherently and irredeemably racist, it can’t possibly continue to believe that it has any right to lead. Such an America would reject the notion that the West is worth defending and regard Europe as also inherently oppressive. We know who will fill the vacuum left by an America in retreat and at war with itself. As they watch America’s self-immolation, leaders in Moscow, Beijing and Tehran surely can’t believe their luck.

Any functioning society must extend tribal loyalty beyond the ties of blood. Ethnicity and Christianity were the glue that helped hold the more homogenous European nation states together. America’s Founding Fathers laid the foundation of a society worthy of the motto “e pluribus unum”—out of many, one—by replacing ethnic and religious loyalties with liberal ideas and deist ideals. A shared loyalty to the Declaration of Independence and the Constitution allows Americans to see each other not as strangers but as fellow citizens.

Yes, the U.S. has not always lived up to its ideals. But to claim that the Founding’s “promissory note” was never anything but a scam to maintain a system of white oppression is ahistorical revisionism that will erode the country’s foundation (emphasis added).

I am not sure how many who will read this blog post will find themselves agreeing with what Schwammenthal is saying. It is my opinion, though, that now is not the time to decide that the Declaration of Independence and the Constitution were, and are, a tissue of deception. Instead, I think we need to reaffirm that both the Declaration of Independence and our Constitution are the foundational pronouncements of our collective intention - an intention to which we continue to pledge allegiance.

Do "We, the people" (those of us alive right now) affirm that all persons are "created equal?" Do those of us present on the scene today affirm that each one of us has an "unalienable right to life, liberty, and the pursuit of happiness?" Do we believe that our government, which we call "ours" because we take personal responsibility for what it does, must follow the requirements outlined in the Bill of Rights?

If we do, then fascism, or totalitarianism, or a submission to authoritarian practices will not occur in the United States of America. And we can be certain in stating this, because we will not just stand around as observers, noting all the latest outrages perpetrated by our president or the Attorney General, or some other governmental authority. We will, rather, do whatever must be done to ensure that Lincoln's words at Gettysburg will prevail.

As before, we will give our lives, our fortunes, and our sacred honor to ensure that "this nation, under God, shall have a new birth of freedom -- and that government of the people, by the people, for the people, shall not perish from the earth."

This is more or less what John Lewis was talking about in the essay he wrote just before he died.

As for me, I am willing to make the pledge. And I don't think I am alone. As we contemplate authoritarian actions by the government, and by the president, here is what I think we should make clear to our worried European friends (and to ourselves):