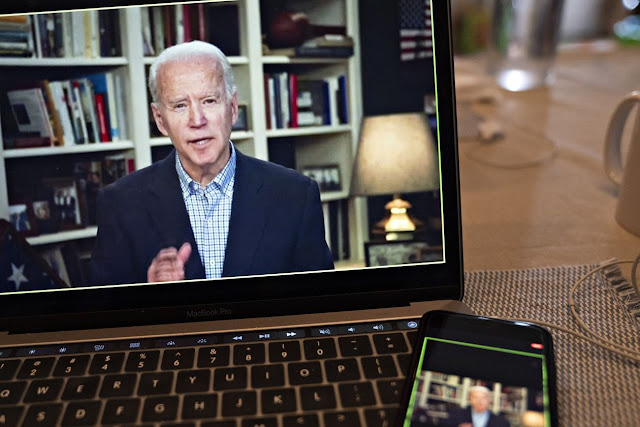 Barton Swaim is a conservative columnist for The Wall Street Journal, and a former speechwriter for Mark Sanford, South Carolina's Republican, and rather erratic, former governor. Sanford is perhaps most remembered for having tried to trick his staff (presumably including Swaim) into believing that the governor was hiking the Appalachian Trail when the governor was actually visiting his mistress in Argentina. Swaim has a new book out, The Speechwriter. Maybe that book discusses this incident; that could be interesting, but I am definitely not planning to buy the book.

Instead, I am planning to give you a little bit of wisdom (or let's call it "punditry") from Barton Swaim, thanks to one of Swaim's fairly recent columns in The Wall Street Journal. Here is a link to the column, entitled "Joe Biden and the Slow Death of Liberalism." Given that a paywall may greet at least some people who try to follow the link, and to read the whole column, here are just a few excerpts:

In nominating Joe Biden, Democrats aren’t choosing a “moderate.” They’re choosing liberalism over revolution. Bernie Sanders said ... “Joe and I have a very different vision for the future of this country.” That is not quite right. The idea that Mr. Biden has a “vision for the future” is preposterous. He has a vision for the past, and even that is cloudy.

Mr. Sanders is a radical, not a liberal. The liberal worldview seeks a more equitable and open polity by means of piecemeal political reform. The radical outlook envisions a new world, not an incrementally better one.

With Mr. Biden’s ascension and Mr. Sanders’s decision this week to suspend his campaign, Democrats are again choosing liberalism.

The modern American liberal is the product of what’s commonly called liberal democracy—the social and political order obtaining in North America and postwar Europe. Liberal democracies value divided governmental institutions, a regulated market economy, a generous welfare state, personal autonomy and the expansion of political rights to formerly excluded classes. Conservatives and liberals alike are “liberals” in this broader sense, but American liberals believe more fervently than conservatives in the power of governmental means to achieve human betterment, and liberals tend to scorn habit and tradition as impediments to righteous goals.

American liberalism’s last great triumphs came during the administration of Lyndon B. Johnson: the Civil Rights Act of 1964, the Voting Rights Act of 1965, the Food Stamp Act of 1964 and the Social Security Amendments of 1965, which created Medicaid and Medicare. Since then it has accomplished no original reforms, only refined or expanded old ones.

The point here is not to disparage liberalism. It is to point out that liberalism in America achieved the last of its great aims a half-century ago. Since then, liberal successes have steadily diminished in importance. The Clean Air Act of 1970 and the Clean Water Act of 1972 empowered state and federal governments to alleviate pollution. In 1979 Jimmy Carter signed legislation creating the Education Department, but its function has never been clear. In 1996 Bill Clinton signed a monumental welfare-reform law, but its purpose was to curb liberalism’s excesses, not to further its aims. Then there was the Affordable Care Act of 2010, a nonradical version of a radical idea that managed to make an expensive and confusing system even more expensive and confusing.

Whatever the merits of these laws, none compares, in sheer transformative effect, with the great reforms of the first half of the last century: the Pure Food and Drug Act of 1906, the Tennessee Valley Authority Act of 1933, the Social Security Act of 1935.

It is a measure of liberalism’s lethargy that Democratic primary voters in 2020 have fixated so exclusively on Donald Trump’s badness. Mr. Trump has inspired liberals in a way that nothing else has in many years. But soon he will be gone, and what then?

A sizable portion of the Democratic electorate, especially its younger members, has wearied of this state of affairs. They want something more to do than tinker and emote.

There are at least a couple of ironies here. First, the idea that "liberals" should take seriously the comments and criticism of a Republican Party operative, like Swaim, does test the patience of anyone of the "liberal" persuasion. Second, as Swaim disparages liberals for their lack of anything like "vision," he never lets us in on what the "vision" of the "conservatives" might be. I guess it is also ironic (irony #3) that Swaim is essentially making a case for the politics of Bernie Sanders, whom all true "conservatives" must surely disdain.

Here is my own view.

As someone who considers himself a "liberal," usually operating under the "progressive" banner, I do think that those who profess an allegience to the "liberal" side of the liberal/conservative spectrum ought to pay attention to what Swaim is saying. Consider the content of the comments, in other words, and not the source.

Considering the content, it is not surprising, as a supporter of Bernie Sanders' presidential campaigns (both times), that I agree with the gist of what Swaim is saying. We are far overdue for a "revolution" in our politics, which does not mean "violence." Read Hannah Arendt on that. As her book, On Violence, makes clear, revolutions are accomplished not by violence, but by the assumption of "power" by those whose power has been diminished or denied: ordinary men and women, in other words, or "the 99%" as we have come to speak of our situation since Occupy.

You want another definition of the "ordinary men and women" whose decision to reassume the power they have always had is what makes a genuine revolution? Here it is:

Listen up, liberals. Time for a (real) change!