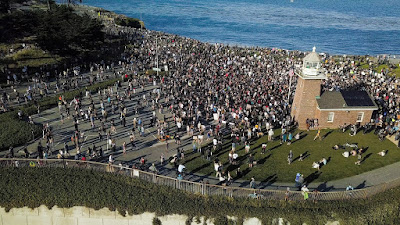 In the article, Esabella Bonner, Tahairie Ritchie, and Ayo Banjo discuss their paths to activism and involvement with Good Times author Susan Landry. The story, which I greatly enjoyed - and which I recommend - made me think of that saying, "We are the ones we are waiting for."

The origins of this observation are debatable (click the link for some discussion of that topic), but the statement itself has always rung true to me. What Bonner, Ritchie, and Banjo have to say about how they stepped forward into leadership positions illustrates a very important truth: we don't need to wait around for some kind of "designated leader" to address the issues we know are critical.

As a college freshman, Banjo became the youngest person in the UC system ever elected to be student body president, and the first Black man at UCSC to hold the post. During his tenure, Banjo secured $500,000 to support housing justice for students facing eviction, helped push for campus police reforms including the use of body cameras, and bolstered access to safe parking for students sleeping in cars on campus. Now entering his senior year, Banjo serves as president of the NAACP’s UCSC chapter, and says these changes are just the beginning.

Bonner organized the massive demonstration at Lighthouse Point, pictured above. and then went on to organize a subsequent demonstration in Capitola. She is now working directly with the Santa Cruz City Police Chief on law enforcement reform.

Inspired by his participation in the gathering at Lighthouse Point, Ritchie pulled together a June 19th protest called “Juneteenth to Allegiance.” There were a dozen speakers and hundreds of participants. "Attendees marched from the Louden Nelson Community Center to the steps of Santa Cruz City Hall, where speakers shared personal accounts of racism they’ve experienced locally and called for an end to police violence and racial injustice."

Naturally, I loved that picture of the demonstration at Lighthouse Point, featured in the article, which I saw just after a friend had sent me an older story from the Good Times, discussing how citizen activism had saved Lighthouse Field in the 1970's. The friend not only sent me a link to the article, but also pulled out several quotes that he said seemed relevant in our current situation. I have to agree!

We are the ones. Then. Now. And always!!

Most people thought it was a horrible idea, but they didn’t know there was any way to stop it,” Patton says (on how the 38-acre Lighthouse state park site was saved as a community benefit and now community treasure).

Nobody believed that the people could actually be in charge of the government. In other words, the elected officials—really, it’s not unlike what’s going on in the national campaign right now—the official elected representatives really didn’t represent the people. They represented the people who had money—the business community and the developers.

Everybody who had sort of assumed there was nothing that could be done, decided, wait, maybe if we got involved in local politics, we could change the way things are happening,” Patton says. 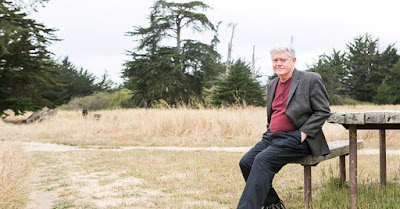