#198 / Tammy Duckworth And The Last Refuge 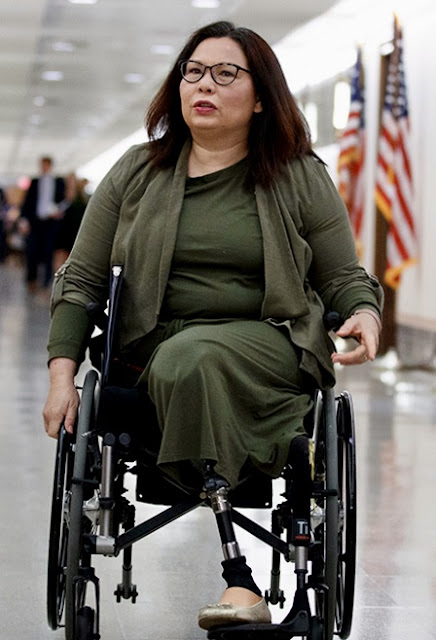 Tammy Duckworth is pictured above. Duckworth is a United States Senator from Illinois. She is also a former U.S. Army lieutenant colonel and is being seriously considered by presidential candidate Joe Biden as a possible vice presidential running mate.

Duckworth is also the author of a recent opinion piece in The New York Times, attacking the patriotism of Tucker Carlson, a Fox News television commentator. Duckworth's column was titled, "America's Imposter Patriots" in the version of The Times that arrived on my front walkway on July 10, 2020. Online, Duckworth's title is a little more personal: "Tucker Carlson Doesn’t Know What Patriotism Is."

News reports, like this one from ABC, and this article in The Daily Beast, make pretty clear that  it was Tucker Carlson who began the name calling. The ABC website says that Carlson called Duckworth, who is a double-amputee combat veteran, and who has received the Purple Heart, a "coward," a "fraud" and a "moron." The Daily Beast says that Carlson also claimed that Duckworth actually "hates America."

Reading Duckworth's article was the first I had heard of this controversy. I don't much follow Fox News! The claim that "patriotism is the last refuge of a scoundrel" has always struck me as probably pretty accurate. Thus, debates about who is more "patriotic" than somebody else always rub me the wrong way. "Patriotism" is not my go-to category for what I am looking for in a national leader - or in a news commentator. That said, much of what Duckworth wrote in The New York Times struck me as thoughtful, and on point. For instance:

I don’t want George Washington’s statue to be pulled down any more than I want the Purple Heart that he established to be ripped off my chest. I never said that I did.

But while I would risk my own safety to protect a statue of his from harm, I’ll fight to my last breath to defend every American’s freedom to have his or her own opinion about Washington’s flawed history. What some on the other side don’t seem to understand is that we can honor our founders while acknowledging their serious faults, including the undeniable fact that many of them enslaved Black Americans.

Because while we have never been a perfect union, we have always sought to be a more perfect union — and in order to do so, we cannot whitewash our missteps and mistakes. We must learn from them instead.

I think that is a great statement. Here, however, is something to which I object. Duckworth began her column with this statement:

A little over 240 years ago, two of my ancestors put on the uniform of George Washington’s Continental Army and marched into battle, willing to die if it meant bringing their fledgling nation inches closer to independence. Centuries later, in 1992, I followed in their footsteps and joined the Army.

Even knowing how my tour in Iraq would turn out, even knowing that I’d lose both my legs in a battlefield just north of Baghdad in late 2004, I would do it all over again. Because if there’s anything that my ancestors’ service taught me, it’s the importance of protecting our founding values, including every American’s right to speak out. In a nation born out of an act of protest, there is nothing more patriotic than standing up for what you believe in, even if it goes against those in power (emphasis added).


Joe Biden voted for the war in Iraq. Duckworth fought in it. What we need now is not a justification of the kind of military interventionism that has characterized American foreign policy since the end of World War II. We need to admit our missteps and mistakes, not whitewash them, not double down in their defense. We must, to quote Duckworth, "learn from them instead."


As I understand it, Joe Biden does now admit that he made a mistake in voting for the war in Iraq. From her column, I am not quite clear that Tammy Duckworth has learned the right lesson about that war, or that she has escaped from that patriotic "refuge" to which those who have made mistakes so often repair.