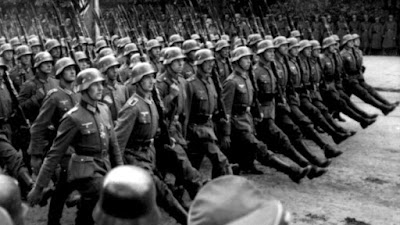 Here is a link to a book I haven't read: Hitler's First Hundred Days: When Germans Embraced the Third Reich.

What I have read is a brief review of the book, published in The New York Times on March 18, 2020. Here is an excerpt from the beginning of this book review, since it is likely that The Times' paywall will come into play and block access to the entire review, which was authored by Jennifer Szalai:

Yes, Adolf Hitler was ridiculous and vulgar, a tin-pot demagogue instead of a smooth politician, but he knew how to excite the nationalist base and deliver a whopper of a speech. Germany’s conservative politicians assured one another that they would still be the ones to pull the puppet strings. As one of them put it, “In two months, we’ll have pushed Hitler so far into a corner that he’ll squeal.”

Needless to say, the adults in the room overestimated their own powers of containment. In “Hitler’s First Hundred Days,” the historian Peter Fritzsche shows how Hitler and the National Socialists wasted little time after he was appointed chancellor on Jan. 30, 1933, in crushing what remained of the Weimar Republic and installing “the 20th century’s most popular dictatorship.”

The changes were audacious, and they were swift. On Day 4, Hitler and his conservative allies censored any press that showed “contempt” for government. On Day 7, he established links between his brownshirt paramilitaries and the official law-and-order apparatus of the state. The Reichstag fire on Day 29 gave Hitler the pretext he needed to get President Paul von Hindenburg to sign an emergency decree suspending civil liberties, and the Reichstag elections a week later consolidated the Nazis’ grip on power. On Day 61, the Nazis organized a nationwide boycott of Jewish businesses, and six days later purged the civil service of Jews.

“A quarter past 11 led, in only 100 days, to the Thousand Year Reich,” Fritzsche writes, referring to the hour before midnight when Hitler and the conservative elites made their back-room deal to appoint him chancellor.

Author Peter Fritzche, a history professor at the University of Illinois, is not "breaking new ground here," as Szalai says. However, Szalai goes on to make this point:

There’s something particularly clarifying about the hundred-days framing, especially as it’s presented in this elegant and sobering book, which shows how an unimaginable political transformation can happen astonishingly quickly.

I believe it is important to recognize this fact - that "an unimaginable political transformation can happen astonishingly quickly."

Should a crisis of authoritarianism visit our country, should elections be suspended, should the Internet be interdicted, should "martial law" be proclaimed, or should something or anything similar ever happen in the United States of America, we will have little time to contemplate a correct response.