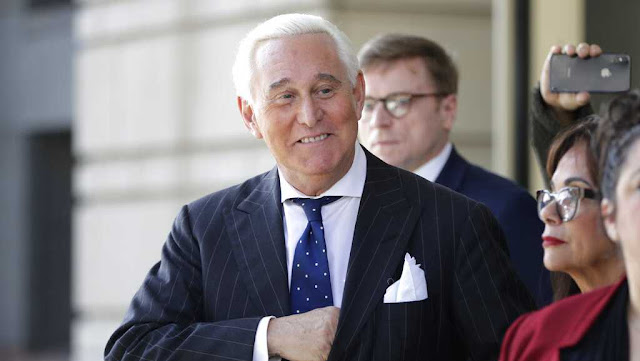 Ruth Marcus, the Deputy Opinion Page Editor of The Washington Post, says the president's pardon of Roger Stone was corrupt. In fact, Marcus says, "it is hard to imagine a more corrupt use of the clemency power than President Trump’s commutation of the sentence of convicted felon Roger Stone."

Marcus lists many other corrupt and questionable past uses of the pardon power by other presidents. This one, she says, is particularly bad, because it completely justifies the concern voiced by George Mason at Virginia’s ratifying convention in 1788. Mason said that the president “ought not to have the power of pardoning, because he may frequently pardon crimes which were advised by himself.” That's what happened here, says Marcus. The crimes of which Stone was convicted were, in essence, crimes done on behalf of the president himself, and with, she believes, the president's knowledge.

Not surprisingly, The Wall Street Journal has a different view. In its editorial on July 13, 2020, The Journal basically says, "they all do it," meaning all presidents. They almost all abuse the pardon power. Also not surprisingly, The Wall Street Journal suggests that it was Bill Clinton who most debased his office by misusing the pardon power to excuse those who would pay him for the privilege of escaping any punishment for their crimes.

Frankly, I think both The Wall Street Journal and The Washington Post make good points. Clinton and Trump have both used the power of pardon in ways that are deeply corrupt. And other presidents have done so, too.

So, what do we do about that?

For good or ill, though, the good ship "Constitution" sailed long ago, and the Constitution is absolutely clear on the question of presidential pardons. Article Two (Section 2, Clause 1), says that the President "... shall have Power to grant Reprieves and Pardons for Offenses against the United States, except in Cases of impeachment."

So, again, what do we do about the misuse of the pardon power - by President Trump, and by lots of other presidents, too?

Marcus tells us what the Constitution makes clear. Abuses of power by the president can be corrected by impeachment - at least as long as the president is still in office. Given recent experience, though, Marcus finds that this notion, offered by James Madison as an answer to Mason, is "heartbreakingly naive."

I would like to suggest that this is not exactly correct. If the president were corrupt, and the Congress and the Courts were not, then our system of government should, in fact, work just as Madison said it would. Our government, however, is deeply corrupt in every branch. Notice that I don't say, "corrupt in both root and branch," using an expression meaning "totally," or in "every way."

Our government is rooted in the people. Are we willing to accept corruption? Both parties are corrupt, as these two editorial statements, I think, make clear, and this "governmental corruption" is, in fact, the governmental challenge of our time, according to former presidential candidate Elizabeth Warren. I think she's right.

Rather than mobilizing our outrage at those elected officials with political views with which we disagree, calling them corrupt, and implying that those officials who agree with us are either not corrupt at all, or are less corrupt, let's admit that the system has been corrupted in every branch.

But let's not concede that our system of government has been corrupted at its roots. Not so long as there are citizens (and I do mean you and me) who continue to be willing to pledge their lives, their fortunes, and their sacred honor, to make free and democratic government a reality. What kind of government are we talking about? We are talking about a government that delivers on that promise made in July 1776, that we will establish and maintain a nation in which certain undeniable facts are made manifest in reality; namely, that all persons are created equal, and that all of us have an equal and unalienable right to life, liberty, and the pursuit of happiness.

Is it, really, heartbreakingly naive to believe that we, the people, will be able to restore and maintain such a government? We will either demand and achieve such a government, or we will live with the corruption we see wherever we look.

July 4th has come and gone this year, but I am still feeling patriotic. How about you?