#187 / Watching Hamilton On The Fourth 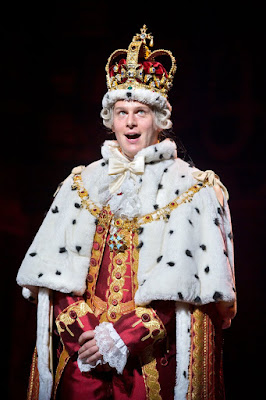 Since Disney+ has now made Hamilton available for streaming (and for a pretty reasonable price), I decided it would be appropriate to watch this celebration of our revolutionary beginnings on the Fourth of July.

I saw Hamilton when a touring cast brought it to San Francisco, a few years ago, but what Disney+ is offering is a film of a live performance, in 2016, with the original cast and in the original theatre. The close ups that the film provides highlight the extraordinary acting, and drive home the powerful lyrics, which you can track by the use of closed captions, if you haven't memorized all the lyrics already (as my granddaughter actually has).

King George, III (pictured above) remains one of my favorite characters. The King has only a small part to play, but since I am so intolerant of all things "royal," all things pompous and elitist, it is wonderful to be able to make fun of him (joining the audience) as he does his "Da da da dat da dat da da da da ya da" thing, and sings lyrics like these:

You'll be back like before
I will fight the fight and win the war
For your love, for your praise
And I'll love you 'til my dying days
When you're gone, I'll go mad
So don't throw away this thing we had
'Cause when push comes to shove
I will kill your friends and family to remind you of my love

I thought it was particularly moving at this time in our national history to see the cast (virtually all people of color, except for King George, of course) sing and speak out the revolutionary message of freedom and equality that is so profoundly associated with American patriotism. This is, without doubt, a time in which we urgently need, as a nation, to deliver on those "self-evident" truths that the Declaration of Independence proclaims. As I have been saying, in writing about the protests that have  been held around the country, following the killing of George Floyd by a Minneapolis police officer, we need to "end the war," and the obligation is on white people to do everything they can to make that happen.


This being my mindset, I interpreted Hamilton as another urgent and powerful statement of this truth, addressed to the nation as a whole. We cannot return to a "normal" that never was, any more than the patriots of the Amerian Revolution could "come back" to England. Now is the time for us to make good on those revolutionary promises from 1776, promises that are highlighted in Hamilton and that have never actually been fulfilled for Black Americans.


Having this rather positive feeling about Hamilton, I was not prepared for an article that suggested that Hamilton might well be taken as an offense by Black Americans who are seriously struggling for racial justice. That possibility, however, is exactly what is suggested in an article in City Journal, published by the Manhattan Institute on July 1, 2020. You can click this link to read the article. Here is an excerpt:


Hamilton is a rousingly, unabashedly patriotic work; “American exceptionalism [set to] hip-hop,” as Terry Teachout put it in his Wall Street Journal review. Since audiences first jumped to their feet to applaud the show, the history Miranda relied on has been toppled like so many statues. The New York Times has endorsed the view that the nation’s birth celebrated in the play occurred not in 1776 but in 1619, with the arrival of the first African slaves on American shores. Following the curriculum now endorsed by the paper of record, educators are preparing to teach the young that the American Revolution was fought for the primary purpose of protecting slavery, and that the revolutionaries Miranda celebrates eventually signed the Constitution, whose main purpose was to codify black people’s enslavement. Can millions of teenagers and their parents continue happily to sing the name of one of the Founding Fathers in good conscience?

Equally problematic for the current moment is Miranda’s embrace of the American dream. “[T]he ten-dollar Founding Father without a father / Got a lot farther by working a lot harder / By being a lot smarter / By being a self-starter;” the cast raps in the opening scene. But every red-blooded progressive knows that the American dream of upward mobility is a myth, designed to blame the poor for their own sorry condition. “[A]nother immigrant, comin’ up from the bottom?” Sounds like fake news—or false consciousness.
That’s the way a number of black scholars viewed the show from the beginning. Soon after the musical opened, Harvard historian Annette Gordon Reed listed its sins. Hamilton was no man of the people, she argued; he was an elitist and crypto-monarchist. Nor was he innocent of racism; he bought and sold slaves for his in-laws and, though a founder of the Manumission Society, had, at best, a tepid interest in abolition. Moreover, the musical is silent about the fact that George Washington owned slaves, an omission that even third-graders will have no trouble spotting these days.

To the extent that Hamilton, the historical figure, was actually an "elitist and crypto-monarchist [who] bought and sold slaves," a wildly popular Broadway musical that celebrates his accomplishments can well be seen as truly offensive.

What should we think?

I believe that what we need to understand is that our history is not, and must not be, "play acting." It can't be "nice words." A popular musical might seduce us into thinking that we can enjoy a performance that celebrates American ideals and then go back home feeling good about ourselves without that performance having changed our behavior in the slightest. That would be offensive.

I don't think that Hamilton is trying to assure us that things are alright, and that we should all go home feeling good about ourselves. That is not the message I take from it. I continue to believe that the message we should take from this musical celebration of American independence is exactly what was proclaimed in the Declaration of Independence in 1776:

It is self-evident that all persons are created equal, and are endowed by their Creator with certain unalienable Rights, [and] that among these are Life, Liberty and the pursuit of Happiness -- That to secure these rights, Governments are instituted among Men, deriving their just powers from the consent of the governed.


And let's not forget what comes next:

That whenever any Form of Government becomes destructive of these ends, it is the Right of the People to alter or to abolish it, and to institute new Government, laying its foundation on such principles and organizing its powers in such form, as to them shall seem most likely to effect their Safety and Happiness (emphasis added).

I think Hamilton celebrates a struggle that was aimed at instituting a new government, a revolution carried out, indeed, by fallible human beings, with Hamilton most definitely included among the fallible. We, as other fallible human beings, almost two hundred and fifty years later, must now realize that "any" government, including our own, that does not treat all persons equally, and that does not secure the unalienable rights of the people, must be altered or abolished.

It is time to focus, in other words, on the actual work of transforming our nation into a nation worthy of the Declaration that proclaimed the ambitions and aims of this nation, right at the very start. The characters we see portrayed in Hamilton - imperfect people - can provide us with both an inspiration and a warning. Let us be both inspired and warned!

The warning is that we must actually accomplish, now, what we have said we would do from the beginning. We must not flinch if we find that we are ruled by a government that is destructive of the purposes that we have proclaimed are our own. If that is true, then it is time to alter or abolish it.

Let is never forget: The past is not dead. It is not even past.

Therefore, the time to achieve the purposes of the American Revolution is now. That's the message I got from watching Hamilton on July the Fourth.

And let us not forget the famous phrase from the Declaration that comes at the end of that document. We tend to remember the opening, with its dramatic claim that all persons are created equal. We must look also to the end of that Declaration, at another dramatic statement, to remind ourselves that if we truly intend to fulfill our promises, promises made to ourselves and to our posterity, that this will require that we pledge "our lives, our fortunes, and our sacred honor."

After you watch Hamilton, when you turn off the television, when the final credits roll, I'd like you to keep that in mind!