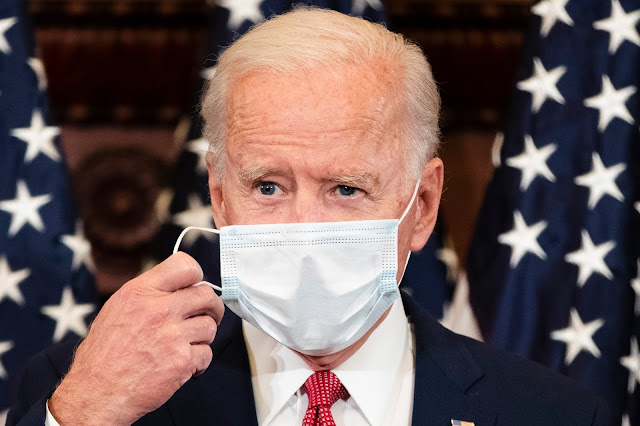 An article in the July 1, 2020, edition of The New York Times reported on what The Times called a "blistering speech" by former Vice President Joe Biden. The following statement, quoting Biden, particularly caught my eye:

“The president talks about, you know, manhood and, you know, and being strong, and you don’t need the mask,” he said. “I think we have to start appealing to the better side of human nature by pointing out that that mask is not so much to protect me. It’s to protect other people,” he added. “And it’s called patriotism. It’s called responsibility.”

I am with Joe on the mask issue, but I want to suggest a more general point.

I think it is profoundly true to say that those who want to be "patriotic," and who desire to pledge their allegience to our nation, and to its system of democratic self-government, need to make certain that "responsibility" is at the very center of their understanding of citizenship.

It is the American idea that "WE, the people," are in charge of our government. Indeed, it is our idea that we ARE the government, that we are "self-governing," and that this is what makes our country unique.

When the United States government drops bombs from drone planes, killing kids, WE are dropping those bombs. WE are responsible.

When the United States government attempts to wall off it borders, and places children in cages, WE are doing that. WE are responsible.

When the United States government plays footsie with Saudi Arabian dictator-killers, to help sell weapons and make money for the military-industrial complex, who do you think is actually responsible? WE are responsible.

If our government fails to take appropriate measures to deal with a global pandemic that puts every person in our country in danger, WE must act.

If we come to understand that the government has not only tolerated but has collaborated in a race war against Black people, extended for hundreds of years, a war that continues even to this day, then WE are responsible for that, and WE need to do something about it.

If we (and I mean each one of us, individually), come to believe that actions undertaken by our government, in our name, are unconscionable and intolerable, if we decide that opportunities that need to be pursued are being neglected, and that challenges that must not be ignored are being both denied and ignored, then WE, personally, must seek to do something about it.

And what does that mean? That means that we must disassociate ourselves from other pursuits, in order to be able to spend our time trying to make the changes that need to be made, setting aside the imperatives of consumption, and entertainment, and other diversions until we succeed in dealing with the problems of government that are OUR problem.

That is what "patriotism" requires. It's something to think about on the Fourth of July.

If we want truly to be patriotic, then our commitment to spend our time on issues of self-government must prevail over our personal pursuits. That is what "patriotism" requires.