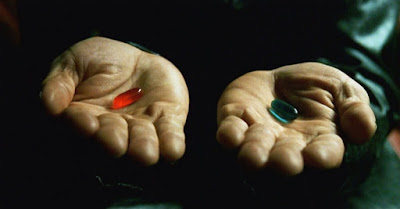 I am not much of a fan of Elon Musk, as I have previously revealed. Giving Musk credit for his bold and original thinking, I nonetheless find his personal behavior to be beyond obnoxious. Were Musk president, I have no doubt that he would be proclaiming himself a very "stable genius," and ordering all the rest of us around, just like the current incumbent does. It may be that Musk's similarities to our current president have influenced my negative reaction to Musk.

The similarities between Musk and Trump were made explicit in a May 20, 2020, New York Times article titled, "A 'Red Pill' May Be Hard for Musk Fans to Swallow." This article, which identifies Musk as "the bombastic head of Tesla and SpaceX," makes clear how Musk pledged his allegience to the Trump agenda with respect to the coronavirus pandemic. The article reports that Musk has told his 34 million Twitter followers to "take the red pill."

The "red pill" reference is to "The Matrix," a 1999 science fiction film that depicts a dystopian future in which humanity is unknowingly trapped inside a simulated reality. "Taking the red pill" allows those who make that choice to see the "truth" of their situation, horrible as it is. The "blue pill," of course, is the pill you take if you are a pussy, and want to be placated with assurances that everything is just great.

Heroes, of course (like Musk), always choose to "take the red pill," and according to The Times, one of the first to join Musk in his "take the red pill commitment" was Ivanka Trump, who proclaimed that she had, already, "taken the red pill." Of such stuff are heroes (and heroines) made!

Below, I am providing a few excerpts from the article in The Times. Since we now color code our politics, with "red" being Republican and "blue" being Democrat (as in "red states" like Florida and "blue states" like California), those who have admired Musk for his intellect and creativity are now having to deal with the fact that Musk in not some kind of liberal, environmental guru trying to save the world through better technology. In fact, Musk seems to endorse the authoritarian Trump program that puts making money as the first priority for the nation:

“Honestly, Musk is becoming a liability and the Tesla board needs to seriously consider ousting him,” wrote Markos Moulitsas, author of “The Resistance Handbook: 45 Ways to Fight Trump.” “And I say that as a proud owner of a Tesla and a SpaceX fanatic who truly appreciates what he’s built.”  ...

The idea of taking the red pill ... grew to mean waking up to society’s grand lies. It was embraced by the right, especially by members of its youngest cohort who organized and spent their time in online forums like Reddit and 4chan.

The truth to be woken up to varied, but it ended up usually being about gender. To be red-pilled meant you discovered that feminism was a scam that ruined the lives of boys and girls. In this view, for a male to refuse the red pill was to be weak.

Red Pill forums were often filled with deeply misogynistic and often racist diatribes. The more extreme elements splintered into groups like involuntary celibates (“incels”) or male separatists (Men Going Their Own Way, or MGTOWs). Conferences like the 21 Convention and its sister convention, Make Women Great Again, sprang up to gather red-pilled men. Being red-pilled became a sort of umbrella term for all of it.

As these conversations seeped into the mainstream, pulled along by a host of other internet language from message boards to establishment Republican conversations on sites like Breitbart, the meaning broadened and got watered down. To be red-pilled can now mean being broadly skeptical of experts, to be distrustful of the mainstream press or to see hypocrisy in social liberalism.  ...

Most recently, Mr. Musk has been a prominent skeptic online of the coronavirus, calling the response to it a “panic” and “dumb” and wrongly predicting close to zero new cases by the end of April. As of Tuesday, there were more than 90,000 deaths from the virus and more than 1.5 million cases in the United States alone.

The night before Tesla’s earnings were released last month, Mr. Musk tweeted an anti-lockdown rallying cry: “FREE AMERICA NOW.” He had a showdown with local lawmakers, threatening to move Tesla headquarters out of California and deciding to reopen a Tesla factory in Fremont, Calif., despite the local county’s restrictions to prevent the virus from spreading.

This is not, of course, actually correct. Our politics is suffering from the "red/blue" dichotomy, which fails to acknowledge a fundamental truth about our human existence. Reality is not binary, but multifaceted. One thing isn't "right," and everything else "wrong." All our perceptions are both "true," and "false," simultaneously. There is (at least I think so) an actual "truth," but no one can claim to know it. We need to talk about what the truth might be, and then do our best to make choices we think are correct. We can then evaluate, as the results of our choices either show us the wisdom of what we have done, or the foolishness of our deductions. Then, of course, we need to change what we do, as "the truth," which none of us knows in full, makes itself manifest.

Self-aggrandizing, self-important, and narcissistic people always think that they are smarter than all the rest of us, and that they know the "truth." When they tell us to "take the red pill" that means: "Do what I say."

Thanks just the same, Elon. I am not going to take any pills at all, red or blue, and I'd advise you to go easy on your own program of self-medication.