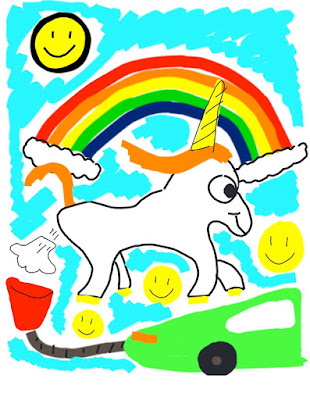 The unicorn pictured above is supposed to be Elon Musk. The image comes from a coffee mug created by Tom Edwards, a Colorado potter. The idea is that Musk is farting electricity, which makes our world a better place. Thank you, Elon Musk! According to an article in The Guardian (click the link above to read it), Musk loved the mug, when he first heard of it. Musk then appropriated the image for his own use, without payment or permission.

As we know, Musk never follows the rules. Thank goodness for that! What a great American entrepreneur! All those "shelter in place" and "social distancing" rules that the rest of us are following will not let Musk build the cars he wants to build (all to benefit America, of course). Thus, as a demonstration that he deserves that "genius" title so often bestowed upon him, Musk insists that those pesky and quasi-fascist mandates deserve to be ignored. Naturally, Musk will not allow the petty bureaucrats to prevail. He has announced that he will ignore their rules. "Just arrest me," he said!

I was thinking about Musk the other day, as I read various editorial statements that denounced his decision to declare himself above the law. He did have one major cheerleader for his defiance, our president, who definitely understands that the normal rules don't apply to geniuses (even the "unstable" ones like the president himself). The president joins Musk in thinking that we are extremely fortunate to have such geniuses among us, and that both he and Musk qualify as the kind of geniuses who should be able to make their own rules. Rules that bind the rest of us have no applicability to them!

Because I liked the Chronicle's editorial on Wednesday, May 13, 2020, which disputes this idea, I am reprinting it below. Before I let you read that, though, I want to make a point that no editorial statement denouncing Musk's "I don't have to follow the law" approach seems to have made.

Just in case you haven't noticed, it is quite likely that Musk's defiance of the Alameda County public health order has absolutely nothing to do with striking a blow for individual freedom in opposition to the stupid rules of junior bureaucrats. That is, of course, the way Musk wants us to evaluate what he is doing. Before we go there, though, let's just remember that Musk will be entitled to $720 million if he is able to keep Tesla's stock price high, and now is the critical moment at which he will either get that $720 million, or not. It's $720 million or nada, and if he can't build cars, "nada" may be what happens.

So, here is the question. What is our automaker genius really doing, in his defiance of the law? What is really happening here? Is Musk standing up for freedom, in opposition to the petty bureaucrats, or  is he trying to make close to a billion dollars, in one fell swoop, even if this means that his workers (like the meatpackers) have to get sick and die, and spread the disease to countless others.**

As Fox News used to say: "You decide!"

Having tried his hand at cave rescue, medical equipment and baby namingwith questionable results, Tesla chief executive Elon Musk seems eager to return to the more workaday business of making cars. The only trouble is the global coronavirus pandemic for which all manner of nonessential workplaces — like, say, manufacturers of boutique electric automobiles — have obligingly suspended operations throughout the Bay Area and beyond.

But Musk isn’t the sort to be bound by such conventional notions as occupational safety, public health and the rule of law. After defying local officials early on, suing Alameda County and threatening to leave the state over the distancing measures that every responsible business is observing, Musk announced Monday that the company’s Fremont plant was restarting production in defiance of state and local orders. He did so with President Trump’s predictable support and despite the fact that county officials were working with him on a plan to reopen. “If anyone is arrested, I ask that it only be me,” he tweeted melodramatically.

But what Musk wants the world to see as brave iconoclasm is just ignorant solipsism. This is, after all, the same man who declared coronavirus concerns “dumb,” predicted “close to zero new cases” in the United States by the end of April and splashily promised to produce some of the ventilators needed for the sickest patients but by many accounts never quite delivered. He has also been credibly accused of safety lapses and union busting. So it’s not surprising that the billionaire would needlessly endanger the health of his employees, their families and the community for a few extra bucks.

Albeit painful for those lacking Musk’s means, the Bay Area’s nation-leading shelter-in-place orders appear to have spared the region an outbreak on the scale of New York’s or Italy’s. But while the spread of the contagion here has stabilized, it has yet to decline consistently; the number of new cases was rising statewide and in Alameda County as of last week, according to The Chronicle’s tracker. A closely watched University of Washington model recently increased projected deaths in the state over the next three months from 4,600 to more than 6,000.

Nor has the state come close to the testing and tracing capability needed to contain new infections when normal activities resume. Daily testing has increased in recent weeks but remains about half what the state deems necessary, while Alameda County is much further behind its target.

Dr. Anthony Fauci, the director of the National Institute of Allergy and Infectious Diseases, warned a Senate committee Tuesday of the “really serious” health and economic consequences of returning to business as usual prematurely, noting that “there is a real risk that you will trigger an outbreak that you might not be able to control ... leading to some suffering and death that could be avoided,” which “could even set you back on the road to trying to get economic recovery.”

Most Americans have the sense to follow the experts’ advice for the sake of our collective long-term health and prosperity despite often painful short-term costs. Musk represents those who can’t be bothered with any concerns beyond their own.