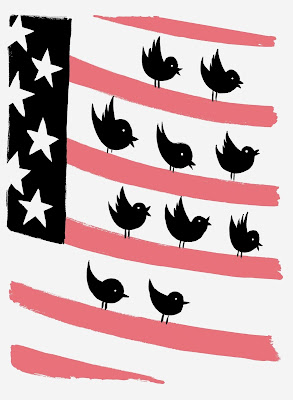 Jill Lepore, a Harvard professor, is definitely one of my "go to" commentators on United States political history - and specifically including the political history we are making right now. In the March 9, 2020, edition of The New Yorker, Lepore had some cogent thoughts on polling ("The Problems Inherent in Political Polling"). Lepore's was the lead comment in the magazine's "Talk Of The Town" section.

I particularly appreciated Lepore's thoughts on Twitter. She cited to Justice Elena Kagan's comment about Twitter in Packingham v. North Carolina, a case in which the Supreme Court held that social media is a "public sphere." Free speech rules are different in the public sphere than in the private spheres in which much of our human interaction takes place (or used to take place, anyway). The Packingham decision on social media rested, says Lepore, on "the Court's belief in its ubiquity."

"Everybody uses Twitter," Justice Elena Kagan said. In effect, Lepore told the Justice, "No they don't!"

In fact [Lepore wrote], only about one in five Americans has used it. Most people who have a Twitter account rarely use it, and very few of those who do post about politics. The ones who do, post a lot—sometimes even as much as the President—and they’re atypical in other ways, too. A study from a decade ago found that the average political tweeter is “a white male in his 30s or 40s who has moderate-to-high household income and considers himself to be a political junkie.” The Twitterati have become more diverse in the years since; Black Lives Matter and MeToo arose on the platform. Still, it remains a very poor proxy for the electorate. In 2018, according to the Pew Research Center, ninety-seven per cent of all tweets posted by American adults about national politics were posted by ten per cent of tweeters. A disproportionate number of the people in Twitter’s town hall are the sorts of people who were eligible to vote in 1820, before the first, Jackson-era expansion of the electorate: the wealthy, the educated, and the hyperpartisan. Twitter isn’t the future of American democracy; it’s the past [emphasis added].

Lepore's judgment about Twitter is one I share. Genuine politics requires real contact between real people, and that contact has to take place in a real, physical space. Real politics means walking door to door. Twitter, Lepore reports, has "advertised its platform to politicians as 'The Town Hall Meeting ... In Your Pocket.'"

Actually, as Lepore so properly observes, Twitter is not "good for democracy." Rather, it "serves as an excellent medium for propaganda."

If you start getting enthusiastic about "online politics," be sure to read Lepore's commentary. Then, go back and read Lepore's article one more time.

Democracy is not what all these online applications produce. Real democracy demands real contacts with real people, IRL.