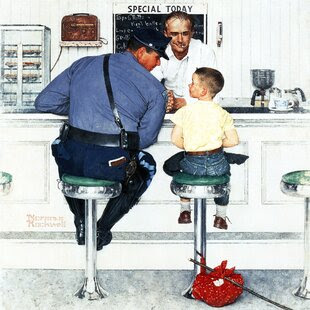 I never had that Norman Rockwell relationship to the police that is illustrated so lovingly above, though I must say that the "runaway" kid shown in this famous portrait looks a lot like me at about that same age. My idea of the police, as I experienced it based on my draft-resisting interactions during the late 1960s, was a lot more like the photo below, which appeared in the June 10, 2020, New York Times: 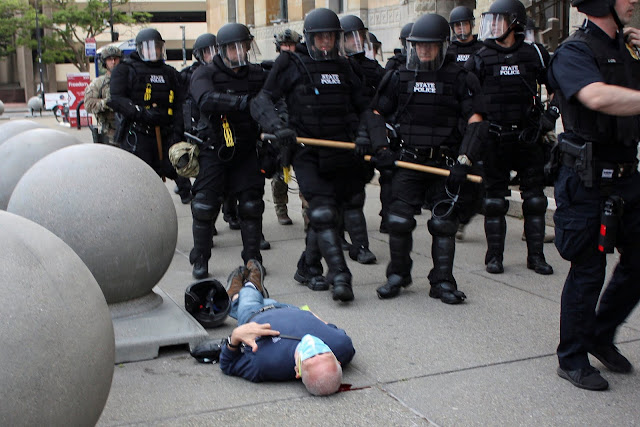 That photo, of course, shows Martin Gugino, a Buffalo, New York peace activist, who was pushed to the ground by two police officers as Gugino was attempting to document a protest against the killing of George Floyd. Gugino suffered a serious head wound, and had to be hospitalized. He was left to bleed as other police walked by. The president then accused Gugino of being an agent provocateur, implying that the police did just the right thing by attacking this seventy-five year old man.

There are lots suggestions that police misconduct should result in "disbanding" the police, or "defunding" the police. Predictably, objections have been immediately voiced to any such thing. There really are public safety and security concerns that our police forces have traditionally handled, from runaway children to violent demonstrations. Not to mention dealing with those who break into cars to steal items visible through the windows or who engage in package thefts from unattended porches. "Defunding" public safety at a time when people are feeling more "unsafe" than usual seems contraindicated, and could be politically counterproductive. But maybe eliminating public safety is not, actually, what is being called for.

I have a couple of suggestions that I think might help us, as we consider how to "disband" or "defund" the police. First, get rid of all that military gear, specifically including the uniforms that make our local police officers look like a "Star Wars" invading army. Second, start doing some better analysis on what our communities are really expecting our police to do, and then tailor responses to the actual requirements, reassigning duties as appropriate.

When someone with advanced weaponry and high explosives appears in our community (as just happened in Santa Cruz County), a law enforcement agency needs to have officers available, properly trained and equipped. However, that is not the typical case. Our public safety providers should be of, by, and for the community, and should come dressed accordingly. They do not need to appear with threatening firepower displayed on most occasions. Sending armed officers to take reports about porch burglaries sends the wrong message - and of course that is amplified if the officers are white, and they are walking into neighborhoods mostly inhabited by persons of color. Complaints about drug abusers injecting in the street? Send in the social workers! AND... as one final suggestion, hire members of so-called "minority" communities to do a lot of routine patrol and police work in their own neighborhoods. We could do that, right? They just need to be responsible. They don't need military-style training and equipment.

These suggestions, plus others along the same lines, could be called "disbanding" the police, but that really only means disbanding the police as we have most recently deployed our officers, dressed up as if they were going to war, and as if our own communities were the enemy.