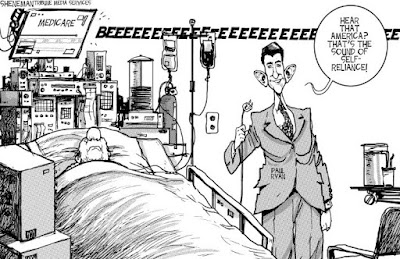 Here is a cartoon depiction of Paul Ryan, as Ryan is pulling the plug on Medicare. You do remember Paul Ryan, right? He was The Speaker of the House of Representatives from October 2015 to January 2019, when the Republican Party controlled the House. Ryan was continually pushing to reduce or eliminate Medicare, and Ryan's efforts, of course, as the cartoon says, were all in the name of "self-reliance."

Maybe Ralph Waldo Emerson would have been a big Paul Ryan admirer, since Emerson was, certainly, an admirer of "Self-Reliance." Somehow, though, I tend to doubt it. At any rate, as we now confront the coronavirus pandemic, it is obvious that we should have "Medicare for All," the very opposite of the Paul Ryan prescription. I thought it was nice that The New Yorker has now admitted that "Reality Has Endorsed Bernie Sanders." It has been Sanders' campaign for the presidency that has put "Medicare for All" at the very center of our current politics.

Sanders and his campaign for the presidency have had a lot to do with making "income inequality" a key political issue, too. In an article in The New York Times on Tuesday, March 31, 2020, Peter S. Goodman talks about "The Nordic Way to Economic Rescue." Goodman doesn't mention Sanders, but it has been Sanders who, throughout the Democratic Party primaries, has suggested that we have a lot to learn from the way Scandanavian countries run their economy and government. Here is what Goodman says:

The United States, by contrast, is marinated in notions of rugged individualism, making economic hardship an often solitary experience....

I think it is not impossible that the United States is going to learn something from the current pandemic, and from our obvious and utter unpreparedness to undertake actions that might help. Such actions (you can call them "Nordic" if you want to) require us to understand that while we are all individuals, we are also inevitably part of a greater whole. If we let individuals perish individually, ultimately the whole ship goes down.

Here is the phrase that I liked best, in the entirety of the Goodman article:

The United States ... is marinated in notions of rugged individualism.

That "marinated" metaphor really speaks to me!

My suggestion is that we pay some attention to what The Times labels "The Nordic Way." If we do that, we might be able to find a way out of the marinade before it's too late. If we continue to soak ourselves in the false claims that "rugged individualism" is more important than collective care and concern, we are going directly from the marinade to the grill, where we will surely be seared and afterwards sliced.

It looks to me like "reality" has endorsed "The Nordic Way."