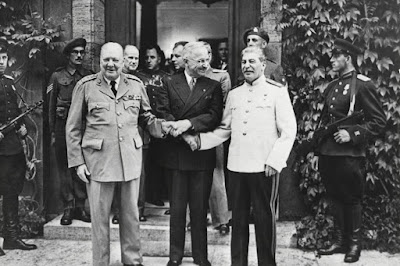 William J. Burns, president of the Carnegie Endowment for International Peace, and a former deputy secretary of state, wrote a column for the March 28-29 edition of The Wall Street Journal that recommended that we look to the past as we determine how best to restructure our world in the post-coronavirus age.

The current crisis has changed things. We do know that. It has been global in scope. So, when it ends, what should we do? Burns appears to find his inspiration in the picture above, showing Winston Churchill, Harry Truman, and Joseph Stalin at their meeting at the Potsdam Conference in 1945.

Potsdam was a follow-up to the Yalta Conference, held earlier in 1945, when President Roosevelt was still alive. Yalta and Potsdam were the occasions upon which Britain, the United States, and the Soviet Union, as "Great Powers," decided how they would carve up the world. Of course, the smiles on the faces of the world leaders in the image above did not last, as I assume everyone knows. The "Iron Curtain" fell soon after, and these three world powers then perpetuated a Cold War that lasted for about fifty years.

Burns' recent column is titled, "A Moment to Renew American Statesmanship." Here is how he sees a possible response by the United States to the current world situation, post the coronavirus crisis:

The test for American statesmanship will be to resist the temptation to pull up the drawbridges and retreat, as well as the illusion that we can restore the easy dominance we once enjoyed.

We cannot resurrect the uniquely commanding positions that helped American statesmen in the administrations led by Harry Truman and George H.W. Bush shape similar plastic moments over the past century. But we can revive their model of character, vision and discipline in applying American power. We can rebuild America’s democratic example and rekindle the confidence of our allies and the respect of our rivals. Even in this most difficult of moments, we have a rare opening to recover a sense of national purpose and enlightened self-interest and to help Americans—and the world—find shelter from the storm.

In our case, when the coronavirus pandemic is definitively "over," the global challenges we face will not have ended at all. Global warming may well have been a contributing cause in the genesis of the "novel" coronavirus - COVID-19. Whether it was, or not, the challenges posed by a civilization and a global economy that is, literally, destroying the natural environment upon which our human civilization depends, will not have disappeared.

While the past can provide some lessons, we need to imagine things that never were. We need to create a world that is something new, something never thought of or dreamt of before. I suggest that we look to "Utopia," not "History," as our major source of inspiration.

Let us not look to the giant corporations that dominate the government of the United States. Let us look to ourselves, instead, in human to human contact, and let us put ourselves to work on projects that will bind the world, not divide it, and that will elevate the local, not extirpate it.

The last thing we need is another Potsdam, with "Great Powers" assigning responsibility for the governance of the world. This is the system that has brought us to the precipice, with global warming and its consequent climate change the challenge that we must now surmount.

History has lessons to teach, but we need to find our hope in something new.