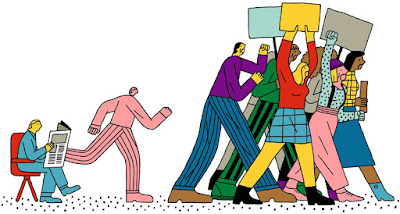 I am reproducing, below, an excerpt from what Eitan D. Hersh has to say about politics, in a January 27, 2020, column in The New York Times. Hersh's column was titled, "Listen Up, Liberals."

In religion and in politics, participants come together in communities to serve a higher purpose. They worship together to serve God. They join advocacy groups and political party committees to serve their civic duty.

But increasingly, especially among well-educated white liberals, religion and politics are not face-to-face communal experiences. Instead, participants try to extract emotional and intellectual gratifications for themselves without obligating themselves to others.

“Spiritual but not religious” identifiers, who now constitute a quarter of the United States population, are disproportionately made up of well-educated liberals. They seek spiritual self-care through technology, exercise and nature rather than through weekly attendance in a religious community.

The political equivalent are the news bingers, online debaters and kitchen-table exasperators who are emotionally invested but do not participate in organized political life. I call them political hobbyists. They are most prevalent among the same cohort of educated white liberals as the spiritual-but-not-religious. In a 2018 survey, for instance, I found that college-educated whites reported spending much more time on political consumption than did blacks and Hispanics, but significantly less time volunteering in political organizations.


I don't much like the tone that Hersh employs in his column, but let's give him credit for making a good point. Any kind of decent "politics" has got to be based on personal involvement with others, and not on individual observation and critique - particularly when that observation and critique is carried out by way of one or another social media platforms. As I am fond of saying, "if you believe in self-government, that means you have to get involved yourself."

I do have a quibble that goes beyond Hersh's self-righteous and "I know more than you do" tone (but maybe I am just too sensitive to that "Listen Up Liberals" phrase, which suggests to me that Hersh thinks he knows a lot more than everyone else). My other quibble is this: I don't like the illustration that was used at the top of Hersh's column. That illustration is reproduced above, and the message conveyed by the picture, as I see it, is that politics is mainly about "protest." Let's give that idea a little more thought.

While protest is often necessary and can inspire civic engagement, I would like to suggest that what we actually need, to restore our politics to good health, is not more people "carrying signs," addressed to those who are presumed to have the power, but more people meeting weekly with those whom they know share their convictions, organizing themselves politically, and then working out how to change public policy to accomplish what they think would be best.

"Protest" can be part of what we need to do, but do we need to remember, always, that we are actually the ones with the power - not those public officials and others who claim our power for themselves.