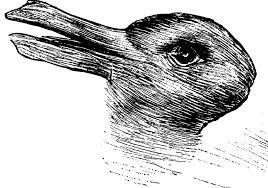 A recent article in Aeon, an online, digital magazine, asks readers to consider that "duck or rabbit" question with reference to the way we should think about politics and the law.

The article is called "Project and System," and suggests that there are "two ways of seeing order in the world: as a spontaneous system or as an intentional project." Having posited this "duck or rabbit" choice, the article then asks, "Which way lies freedom?"

Here's a quick excerpt from the article, to give you the flavor:

Toward the end of his Philosophical Investigations, Wittgenstein considers the well-known duck/rabbit illusion. The same image can appear as a duck or as a rabbit. It cannot, however, be seen as both at once; our perception moves back and forth between the two. We cannot decide to see just one. That seeing as will determine a set of expectations and connections – uses – that will sustain different forms of enquiry responsive to different questions and moving in different directions. The image does not change, but the world within which it has meaning changes.

The law, for example, is like that duck/rabbit image. We are not just captured by a picture; we are captured by two pictures of the same phenomenon. The pictures are already at work when we reason within the law: they ground different interpretive methods. Similarly, they are at work when we theorise about the nature of law, that is, when we try to explain the character of legal order. These two pictures are that of project and system.

‘Project’ imagines law as the product of authors who are free agents capable of acting with intention after some sort of deliberation. For the ‘project’ imagination, legislation is the paradigm of law. Meanwhile, ‘system’ imagines law as a well-ordered whole that develops immanently and spontaneously from within individual transactions. System is a relationship of parts to whole, and of whole to parts. For the systemic imagination, the common law is the paradigm. Judges decide individual cases relying on precedents – that is, relying on prior acts of the same sort that they are pursuing. Out of those countless individual decisions, a system of order emerges. That system has identifiable principles – legal norms – but those principles were not themselves the product of an intentional act. The common law of contract, for example, has a systematic order, but the idea of that order did not precede the fact of its appearance. In a project, the idea of order precedes the act; in a system, we discover the idea of order only after the act.

Once we are alert to the distinction of ‘project’ and ‘system’, we see that it is by no means unique to law. These two pictures dominate our accounts of order. Traditionally, those accounts extended into the natural order: is nature God’s project or a spontaneous system? Today, the duck/rabbit problem of ‘project’ and ‘system’ presents itself whenever we give an account of the human world, from the individual to the society. Do we make ourselves according to an idea or do we realise an inner truth of ourselves? The social sciences approach society as system; the regulatory state imagines it as project.

These debates will never end although their locus will continually shift. They cannot end because order is always both duck and rabbit. This is merely another way of saying that man always finds himself both free and already situated in a fully ordered world. Without projects, we could not imagine our own freedom; without a system, the world would so lack order that everything would appear arbitrary and capricious. We can no more escape ‘project’ and ‘system’ than we can escape freedom and causality. At the root of our legal and social theories, one finds the deepest puzzle of metaphysics. If ever we thought otherwise, it was because we were held captive by a single picture.

I agree that our human world is always both "duck and rabbit," part of an ordered "system," but the product, also, of a set of specific and concrete actions that are, in fact, "projects."

Here is one additional thought: When we think of the world as a "project," we necessarily understand our own ability to change the world. We are considering ourselves as "actors."  When we contemplate the ordered nature of the world around us, thinking of it as a "system," we do so as "spectators" or "observers." Both perspectives are valid. We are both "observers" and "actors."

Our "freedom," however, is defined by the actions we take, not by the observations we make.

I am fine with contemplating the "system," but what I know is most necessary is not that I observe the world, and explain it, but that I take action to change it!