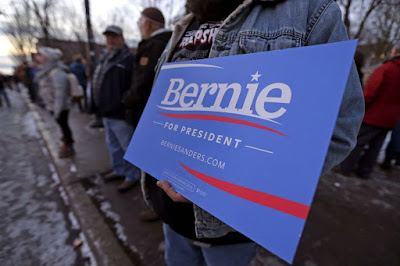 Over the weekend, a friend sent me a blog posting by Russell Dobular, who is the owner and artistic director at Endtimes Productions. Dobular headlined his posting as follows: "Democracy is Broken: Why 51% of Sanders Supporters are Considering a 3rd Party." Dobular doesn't directly say that he is one of those who plans not to vote for the Democratic Party nominee (if the nominee isn't Bernie Sanders), but I gather that he is heading in that direction.

I am not! And as far as I know, Bernie Sanders isn't, either!

Make no mistake, I am a very strong and dedicated Bernie Sanders supporter, and I have been a Bernie Sanders supporter since 2016. I was an alternate delegate for Sanders at the 2016 Democratic National Convention, and I have offered to serve as a Sanders delegate this time around, too. I also think that Dobular makes some extremely valid criticisms of the Democratic Party. However, you would be wrong to count me as a person who is considering voting for a third party in November. I plan to vote for the Democrat.

The headline I have chosen for my own blog posting, today, suggests why that is so. I have conflated, in my headline, two sayings that epitomize a type of politics that, when put into practice, has the exact opposite effect from the effect that those engaged in the political activity desire.

The Democratic Party has often been called a "Circular Firing Squad." Clearly, a circular firing squad is not a very effective way to vanquish and eliminate whatever enemy the Democratic Party might have in mind. Another well-known description of how politics should not be done is summed up in the "Ready, Fire, Aim" maxim. Again, being a bit too quick on the trigger is unually counterproductive where serious politics is concerned.

Our political system is set up, currently, to ensure that voters have two choices, Democrat or Republican. One big problem, and one of the main reasons that lots of people hate politics, is that the two parties are generally more alike than different. Both of them pander to money, the big corporations and the ultra-wealthy. That is definitely not good. However, the parties are not identical, and this time around it is clear that a vote that makes it more likely for the Republican Party to win is a vote for Donald Trump. And that is a vote that is perilous in the extreme - perilous in almost every possible way.

I will keep working for genuine self-government and democracy in the United States, but when I get a binary choice this year, I know what choice is the least bad!

I am not going to be a part of a circular firing squad. I am also going to take aim before I fire.

A recent email from SantaCruz4Bernie asked a question about how progressive Bernie Sanders supporters should relate to the Democratic Party. Here's how that email put it: "I think the correct answer to the question, 'Should we work within the Democratic Party or outside of it?' Is Yes, Both."

That sounds right to me.