#152 / One More Time For The Vietnam Generation 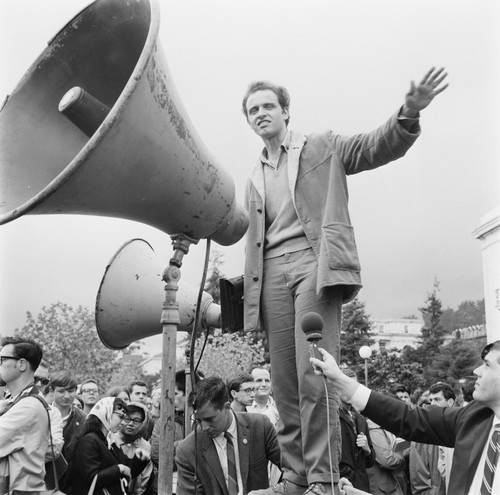 If you instantly recognize this picture, you are probably one of the members of the "Vietnam Generation" to whom I am particularly addressing today's blog post. For those who don't recognize the picture, this is Mario Savio, standing on top of a car in UC Berkeley's Sproul Plaza.

As Wikipedia reports, Savio was "an American activist and a key member in the Berkeley Free Speech Movement. He is most famous for his passionate speeches, especially the 'put your bodies upon the gears' address given at Sproul Hall, University of California, Berkeley on December 2, 1964." I have reproduced the full text of Savio's speech at the end of this posting. You can also listen to an audio/video recording of the speech by clicking this link.

I was in my fourth year at Stanford University when Savio gave that speech. I recognized the picture instantly. Savio's call to "put your bodies upon the gears" was an appeal that spoke directly to me. I heeded that call, four years later, when I voluntarily gave up my then-student deferment and refused induction into the armed forces in Oakland, California. Many in the "Vietnam Generation" changed their lives sometime during this period, from 1964 to 1968. Savio's speech wasn't the only reason, of course; there was a lot going on, but this speech did epitomize the kind of response that many in that "Vietnam Generation" felt was necessary, to stop what one of Bob Dylan's albums called a "World Gone Wrong."

Some who "put their bodies upon the gears" in the 1960s and early 1970s died or were mangled. Many did not suffer such consequences. I certainly didn't. I came back to law school, got my JD, passed the California Bar Exam, went to Theological Seminary in New York City for a year, became a general practitioner in Santa Cruz, California, got elected to the Santa Cruz County Board of Supervisors, served for twenty years in that position, headed up two wonderfrul nonprofit organizations, and then ended up (right now) teaching undergraduate students at the University of California, Santa Cruz.

So far, at least, I have not told the students in my classes to "put their bodies upon the gears," but sometimes I am tempted to do that. The world is still going wrong. Really, really wrong!

Instead of exhorting young students to do something about that fact, I am starting to think that it is really my turn to do something - our turn, really, those who might self-identify as the "Vietnam Generation," as I am calling it here. Savio's speech still echoses for me, and I am thinking that it might be the moment to spend some of my remaining time trying to do what that "Vietnam Generation" did not accomplish before.

Despite our efforts in the 1960s and 1970s, neither racism, nor militarism, nor economic injustice has disappeared. In fact, they are "surging," to use the language of the coronavirus pandemic. In the 1960s there was a "surge" towards racial and economic justice, towards a world at peace, and those who might self-identify as members of the "Vietnam Generation" should be proud of our efforts to confront and counteract the "operation of the machine."

But... The machine grinds on, and now the entire Natural World is at peril. Our situation is worse than when Savio made his speech. So, pay attention to this, the famous part:

Every day, I am feeling more and more that way. It could be time for those who can self-identify as the "Vietnam Generation," those who responded to Savio in 1964, and to others like him, to make  one more effort to make the machine stop.

MARIO SAVIO, DECEMBER 2, 1964:
You know, I just wanna say one brief thing about something the previous speaker said. I didn't wanna spend too much time on that 'cause I don't think it's important enough. But one thing is worth considering.

He's the -- He's the nominal head of an organization supposedly representative of the undergraduates. Whereas in fact under the current director it derives -- its authority is delegated power from the Administration. It's totally unrepresentative of the graduate students and TAs.

But he made the following statement (I quote): "I would ask all those who are not definitely committed to the FSM cause to stay away from demonstration." Alright, now listen to this: "For all upper division students who are interested in alleviating the TA shortage problem, I would encourage you to offer your services to Department Chairmen and Advisors." That has two things: A strike breaker and a fink.

I'd like to say -- like to say one other thing about a union problem. Upstairs you may have noticed they're ready on the 2nd floor of Sproul Hall, Locals 40 and 127 of the Painters Union are painting the inside of the 2nd floor of Sproul Hall. Now, apparently that action had been planned some time in the past. I've tried to contact those unions. Unfortunately -- and [it] tears my heart out -- they're as bureaucratized as the Administration. It's difficult to get through to anyone in authority there. Very sad. We're still -- We're still making an attempt. Those people up there have no desire to interfere with what we're doing. I would ask that they be considered and that they not be heckled in any way. And I think that -- you know -- while there's unfortunately no sense of -- no sense of solidarity at this point between unions and students, there at least need be no -- you know -- excessively hard feelings between the two groups.

Now, there are at least two ways in which sit-ins and civil disobedience and whatever -- least two major ways in which it can occur. One, when a law exists, is promulgated, which is totally unacceptable to people and they violate it again and again and again till it's rescinded, appealed. Alright, but there's another way. There's another way. Sometimes, the form of the law is such as to render impossible its effective violation -- as a method to have it repealed. Sometimes, the grievances of people are more -- extend more -- to more than just the law, extend to a whole mode of arbitrary power, a whole mode of arbitrary exercise of arbitrary power.

And that's what we have here. We have an autocracy which -- which runs this university. It's managed. We were told the following: If President Kerr actually tried to get something more liberal out of the Regents in his telephone conversation, why didn't he make some public statement to that effect? And the answer we received -- from a well-meaning liberal -- was the following: He said, "Would you ever imagine the manager of a firm making a statement publicly in opposition to his Board of Directors?" That's the answer.

Well I ask you to consider -- if this is a firm, and if the Board of Regents are the Board of Directors, and if President Kerr in fact is the manager, then I tell you something -- the faculty are a bunch of employees and we're the raw material! But we're a bunch of raw materials that don't mean to be -- have any process upon us. Don't mean to be made into any product! Don't mean -- Don't mean to end up being bought by some clients of the University, be they the government, be they industry, be they organized labor, be they anyone! We're human beings!

And that -- that brings me to the second mode of civil disobedience. There's a time when the operation of the machine becomes so odious, makes you so sick at heart that you can't take part! You can't even passively take part! And you've got to put your bodies upon the gears and upon the wheels, upon the levers, upon all the apparatus -- and you've got to make it stop! And you've got to indicate to the people who run it, to the people who own it -- that unless you're free the machine will be prevented from working at all!! (emphasis added)

That doesn't mean -- I know it will be interpreted to mean, unfortunately, by the bigots who run The Examiner, for example -- That doesn't mean that you have to break anything. One thousand people sitting down some place, not letting anybody by, not [letting] anything happen, can stop any machine, including this machine! And it will stop!!

We're gonna do the following -- and the greater the number of people, the safer they'll be and the more effective it will be. We're going, once again, to march up to the 2nd floor of Sproul Hall. And we're gonna conduct our lives for awhile in the 2nd floor of Sproul Hall. We'll show movies, for example. We tried to get Un Chant d'Amour and [they] shut them off. Unfortunately, that's tied up in the court because of a lot of squeamish moral mothers for a moral America and other people on the outside. The same people who get all their ideas out of the San Francisco Examiner. Sad, sad. But, Mr. Landau -- Mr. Landau has gotten us some other films.

Just one moment. We've had some good, long rallies. And I think I'm sicker of rallies than anyone else here. She's not going to be long. I'd like to introduce one last person -- one last person before we enter Sproul Hall. Yeah. And the person is Joan Baez.