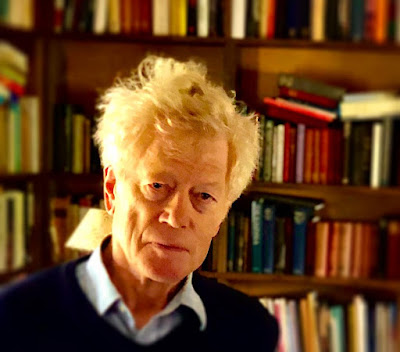 It wasn't until after he died, and I read an econmium to him in an online post in The American Conservative, that I became acquainted with Sir Roger Scruton. If you click the link to his name, you will find a Wikipedia write-up. If you click this link, you will be transported to Scruton's own website. This link will take you to the salute to Scruton I mentioned above. Rod Dreher, whom I have followed since he was written up, himself, in The New Yorker, called his tribute to Scruton, "The Sacred Roger Scruton."

Having seen Dreher's column, and not having previously heard about Scruton, I followed up a link in what Dreher had written, and was provided with an opportunity to hear what Dr. Mark Dooley thought about Scruton. Dooley, who is an Irish philosopher and newspaper columnist, loved Scruton. This is evidenced by the fact that Dooley wrote a whole book about him, Conversations With Roger Scruton.

British Prime Minister Boris Johnson apparently hailed Scruton as “the greatest modern conservative thinker," but Scruton is not universally loved or admired in the United Kingdom. Another commentator from the British Isles, Tom Whyman, who is also a writer and a philosopher, says that "Roger Scruton helped make things worse."

I enjoyed the learning tour that I have documented above, which I would call: Scruton, Scrutinized! I certainly encourage others to follow my footsteps.

In the end, however, I return to the comment by Dreher that set me off on this adventure of investigation. Dreher quotes Dooley extensively, and this statement (Dooley by way of Dreher) is what made me want to find out more about Scruton:

As we spoke that weekend, neither Roger nor I had any sense that he was so close to death. Indeed, he was convinced that he was edging closer to remission, and that we ought to plan books and interviews for his YouTube channel. And yet, I was struck by how he repeatedly insisted that his life’s work had been a spiritual endeavour. In all the time I had known him, he had rarely used that word. Was he saying that his copious writings were somehow quasi-religious, or that they offered a mystical vision of the world? In hindsight, I think he was using it synonymously with another term he regularly employed: the sacred. In my books on Scruton, I consistently emphasised this theme of the sacred which has featured, either directly or implicitly, since his earliest works on aesthetics and architecture. But what does he mean by it? The best insight is offered in an essay from 1986, entitled ‘The Philosopher on Dover Beach’: ‘[T]he free being is incarnate, and to see human life as a vehicle for freedom – to see a face where the scientist sees flesh and bone – is to recognise that this, at least, is sacred, that this small piece of earthly matter is not to be treated as a means to our purposes, but as an end in itself’.

I sometimes think we can best understand life by penetrating beyond activity and appearance to what I postulate are fundamental "categories" that allow us successfully to understand and to operate in the world in which we live. These "categories" are something like, but not quite the same thing as, Plato's forms.

I frequently say that my favorite category is "possibility." A close second would certainly be "the sacred." An appreciation for the fact that there is such a thing as the sacred is not bound up with conservatism, either, whether of the political or the religious variety. Jerry Mander is a writer and activist who comes at his commentaries from a distinctly "leftwing" perspective. I know that I have previously written in this blog that my own readers should read Mander's book, In The Absence of the Sacred. I recommend it again, right now.

In my view, unless and until we can begin to understand that this Earth is sacred, and that every person and thing within it is sacred, too, and until we act accordingly, we will deserve the fate that we can all see, now, is coming so swiftly down upon us.

It was fun to scrutinize Scruton.

But let's start scrutinizing ourselves, too. We need to realize that the "political world" in which we most immediately live has become a world that is ever more dismissive of the sacred World of Nature, the world that surrounds and sustains us, and upon which we are ultimately dependent. Only as we truly come to understand and appreciate this will we be able to do what we must do to allow our own human world to survive.

We must scrutinize ourselves, and then change our lives, accordingly.

You could start with Mander's book, if you want to take this comment seriously!