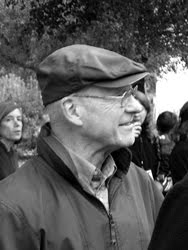 Dwight Clark is pictured above. NO, he's not the football Dwight Clark. The Dwight Clark pictured was the Dean of Freshman Men at Stanford University when I showed up on campus in 1961. Here is a quick history of Dwight's involvement with Volunteers in Asia, taken from the VIA website and from the website of Learning Across Borders (both organizations that he founded and led):

VIA began in 1963 when Dwight Clark, then Stanford’s Dean of Freshman Men, organized a summer project with Stanford University students. The students assisted programs serving Chinese refugees in Hong Kong through rooftop schools, medical clinics, recreation programs, and road building. The summer reshaped many of these students’ personal and professional goals. They so valued the benefits of their cross-cultural experience that they recruited other students for similar projects. In 1966, the program was incorporated under the name Volunteers in Asia, now VIA.

Dwight Clark ... founded Volunteers in Asia (VIA) and served as its President for 40 years; under his leadership, VIA has sent thousands of American students to volunteer in Asia and has brought thousands of Asian students to Stanford University for a wide range of short-term study programs. Upon retirement from VIA, [Dwight] started Learning Across Borders, a non-profit educational organization which offers experiential programs in Southeast Asia for Japanese and Taiwanese university students. He shares his time between California and Asia.

As it turned out, I was one of those thousands of students sent to volunteer in Asia, thanks to Dwight Clark and VIA. My recruitment, though, was perhaps just a little bit out of the ordinary. I certainly never applied!

I knew Dwight because I came in contact with him during my freshman year at Stanford. As Dean of Freshman Men, Dwight presided over Wilbur Hall, the freshman men's dorm that was my home during my first year at the university. In addition, a few of my friends were among the very first students who went to Hong Kong and to other parts of Asia in the very early days, as Dwight developed the VIA program. I got to know Dwight pretty well, but I was definitely not an "early adopter" into the ranks of VIA Volunteers. In fact, it never occurred to me that I would ever want to spend my summer in Asia, teaching English to Chinese students, or otherwise working in some similar task undertaken by those who participated in the VIA program.

In 1968, though, I did take on a summer assignment with VIA, to teach English vocabulary at Linson College, located in Macau, which was then a Portugese colony, located on the China mainland, and which was just a forty-five minute ferry ride away from Hong Kong. Here is how it happened.

Perhaps mainly because I was a draft resister, I became a regular Attender at the Palo Alto Friends Meeting (the Quakers) sometime in 1965 or so, and I continued attending Meeting as I went from being an undergraduate to being a student at Stanford Law School. Dwight, too, attended Meeting - another reason I knew him - and one day in the late spring of 1968, as I was sitting quietly in Meeting, "centering down," as the Quakers call it, but before the official beginning of worship, Dwight came in and sat down right next to me.

Quakers worship in silence, and they only talk (or they are only supposed to talk, at least) when moved by the Spirit. I took the commitment to Silent Worship very seriously, and I did not favor little friendly conversations with others as Friends came in, just before Meeting began. Dwight, however, after sitting down next to me, immediately began trying to recruit me into the upcoming VIA summer program, since the person who had signed up for Macau had unexpectedly had to drop out. Frankly, I was a bit irritated. I remember that. I don't think I was hostile in my response, and I am not sure whether Dwight ever realized I was not at all pleased that he would pull me out of my preparations for the Meeting with this proposition that I should head to Asia in something like three weeks.

At any rate, as the Meeting came to order and silent worship began, I told Dwight, "thanks," but also, and very definitively, I told him, "no."

During Meeting for Worship that day (and this kind of thing is exactly what Quakers always expect from Silent Worship), I received a very powerful, and in fact overwhelming, message that I should accept Dwight's offer. At the rise of Meeting, I turned to him, to clasp hands in our traditional end-of-Meeting practice, and told Dwight "yes."

Another VIA volunteer on that summer trip was Marilyn Dilworth, an undergraduate student who was partial to draft resisters, and we were married in the Palo Alto Friends Meeting in 1969, just about one year and three months after that Meeting in which I got the message to become a VIA volunteer. I probably never properly thanked Dwight for his irritating intervention in my life, but I am pretty sure I did tell him this story. That encounter with Dwight very significantly changed my life - and I am very happy that it did!

Dwight Clark also gave me one other gift, which I received during that summer trip with the 1968 VIA Summer Volunteers. Before we all went to our assignments, the entire group visited Japan, and Taiwan, and we often walked between various appointments as a group. Dwight was there, in charge, with the difficult task of keeping us on schedule, and keeping us together, and keeping us all heading in the right direction. As we sauntered down a lush, tropical path somewhere (it was probably on Taiwan, but I can't remember exactly), I vividly recall how Dwight came trotting up from the back of the group, and gave us all this friendly encouragement and admonition as he moved up past the stragglers to reach the front of the line: