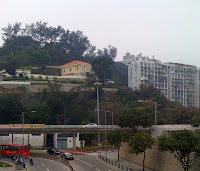 Yesterday, I revisited Macau, where I taught vocabulary to Chinese students during the summer of 1968.

When I was there before, I had a "tab" (paid for by Linson College) at a little "continental" (Portuguese) restaurant near the docks, which is where I ate. Then, I'd take a bus

back to the school. The bus wound its way uphill towards the colonial neighborhood in which the school was located. The buses were wooden-sided, and in the front of the passenger compartment was a large, life size mural-picture of Mao Tse-Tung, sitting at a polished wooden table, drinking tea. The bus benches and the picture were arranged in such a way that the passengers had the impression that they were taking tea with Mao.

Macau was a very small-scale former Portuguese colony in 1968, located on the Chinese Mainland, and under Chinese control (as opposed to Hong Kong, which was still controlled by the British in 1968). The excitement in Macau was provided by the dog racing track and the one casino down near the waterfront (or maybe there were two casinos, but I'm almost certain there were not more than that).

I had heard that Macau had become the "Las Vegas" of Asia, and so it has. Countless casinos have displaced everything else along the waterfront. It was going to be my intention to avoid the casinos, and to walk up the hill to the old neighborhood of Linson College, but I couldn't accomplish it. Freeways barred the way. In fact, I could hardly escape from the Ferry Terminal, and had to beg the pardon of the security manager of the Macau Grand Prix, as I cut through their offices, which are located in the Terminal area, looking for a pedestrian exit to the town.

I did see, far beyond where I could walk, the old Cathedral, located on top of the hill, and to which I used to walk. Some evidences of the old colonial buildings could also be spied, lost among the modern skyscrapers. As for buses, there are lots of those - all heading out on the dedicated mission of delivering the gamblers to the various casinos to which they are attached.

A lot can change in forty-two years!