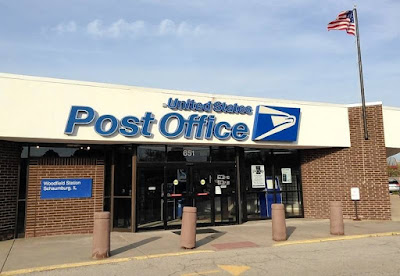 Ted Widmer, a professor at the Macaulay Honors College of the City University of New York, wrote a column that appeared in The New York Times on May 16, 2020. As Widmer's headline put it, "The Postal Service Is Not a Joke." That was the hard-copy headline, and it referenced a statement by our president, asserting just the opposite. Our president has claimed that the United States Postal Service is "a joke."

This discussion about the future of our Postal Service brought a Bob Dylan song to mind; namely, "Stuck Inside of Mobile with the Memphis Blues Again." That is a pretty long song, and the oft-repeated chorus is what has furnished my headline for today's blog posting:

Oh, Mama, can this really be the end
To be stuck inside of Mobile
With the Memphis blues again

If you are wondering what this Bob Dylan song has to do with the U.S. Postal Service, click the link above, which will provide you with the complete lyrics. Among them you will find this verse:

Well, Shakespeare, he’s in the alley

With his pointed shoes and his bells

Speaking to some French girl

Who says she knows me well

And I would send a message

To find out if she’s talked

And the mailbox is locked

Dylan and Widmer are both on the same page. Locking up the post office is "no joke." In fact, it is something that can have a catastrophic import and impact, and that might well signify that "the end" has come.

But the end of what? Here is an extensive excerpt from the Widmer column:

It would be difficult to think of a time when we have depended more on the United States Postal Service. With tens of millions of Americans quarantined in their homes, the steady delivery of checks, letters, food and medical supplies is a lifeline.

That goes especially for the elderly, the sick and the poor, the people most affected by the virus. They have limited access to laptops and phones, so Zoom is not an option for them. For these citizens, the sight of a blue uniform six days a week reminds that their government is there for them.

Strangely, that same government is trying to undermine one of its most effective instruments. President Trump has dismissed the Postal Service as “a joke,” and last week he named Louis DeJoy, a major Republican Party donor with no experience in the agency, as his next postmaster general, replacing a lifelong postal employee.

The president has also demanded that the Postal Service quadruple its shipping prices, motivated in part, it seems, by the desire to hurt one of its big users, Amazon. Mr. Trump’s drive to raise prices dovetails with the desire by many Republicans to either force the service to privatize or at least undercut it in favor of private shippers like FedEx.

If prices are quadrupled, it will briefly inconvenience Amazon, which will simply pass on the expenses to its customers. But for the Americans most reliant on home delivery, this will come as a heavy new tax. At the same time, the service is in financial trouble; without major new funding, the service will run out of money in September, well before the November election — whose success may depend on a huge mail-in effort.

The Postal Service was never supposed to be a moneymaking enterprise, or a political football. The founders understood that the reliable delivery of information was basic to democracy ...

In 1792, he and James Madison pushed an act through Congress establishing a national system of post offices and post roads. The legislation specifically set a low rate for newspapers, so that Americans could learn about the issues of the day. As Washington wrote in his annual message of 1791, a strong postal system was essential to democracy, and would help to spread “a knowledge of the laws and proceedings of the government.”

In the years that followed, Europeans marveled at the efficiency of the American system. Alexis de Tocqueville noted an “astonishing circulation of letters and newspapers” everywhere he went. In good times and bad, the mail went out, to all of the country’s far-flung citizens. Even after the Civil War broke out, Abraham Lincoln insisted that the U.S. mail be delivered throughout the seceded states ...

The Postal Service helped to heal the country by uniting North and South into one system again, and the introduction of rural free delivery in 1896 connected farm families to the wider world. The mail even facilitated immigration, allowing young migrants to let relatives know their whereabouts. In 1889, more than 87 million letters were sent between the United States and Europe. Letter carriers delivered the mail through the 1918 flu pandemic, and every other crisis of the 20th century.

This rich tradition remains a source of pride for postal employees. The Postal Service has also strengthened democracy in a quieter way, through its commitment to diversity — 39 percent of its employees are people of color, and 40 percent are women.

Americans may be living apart, by necessity; but it does not necessarily follow that we must be so divided. Thanks to our letter carriers, we are not. They show up every day, binding Americans together, as Lincoln hoped they would. Every delivery is a small act of union.

The slogan on the old Farley Post Office building in New York proclaims these words: “Neither snow nor rain nor heat nor gloom of night stays these couriers from the swift completion of their appointed rounds.” They were added by one of the building’s architects, William Mitchell Kendall, who found the lines in Herodotus. Awkwardly, they describe the efficiency of the Persian couriers, whose descendants now populate Iran — an argument that may not win friends in the Trump administration.

But if that inscription does not suit, there is another one close to the White House and the Capitol, easily read from the street, that reminds us of how much we get from our mail. The old Washington Post Office is now the Smithsonian’s National Postal Museum, close to Union Station. The inscription over its west entrance asserts that a letter carrier is not only the “consoler of the lonely,” but the “enlarger of the common life.” Common life endures, even in a crisis, as Washington, Lincoln and other presidents instinctively understood. Despite the president’s claims, the Postal Service is no joke.

Widmer is asserting, and I absolutely agree, that the Postal Service is central to our democracy. Actually, I think Bob Dylan is worrying about the same issue, although expressing himself poetically. Shutting down the Postal Service would not be a "joke," and it could even be "the end" to our system of representative democracy, something we tend to take for granted.

I think we need to take this threat seriously. We know that the United States Senate will not hesitate to do virtually anything necessary to maintain the hegemony of the Republican Party, which represents the ultra-wealthy and the military and corporate powers that are seeking to "Rule The World," as Noam Chomsky puts it.

If we don't have a Postal Service this November, it will be a lot easier to suppress votes, and to make sure that the results of the November 2020, election will return Donald Trump to power. As many of us know, this could "really be the end."