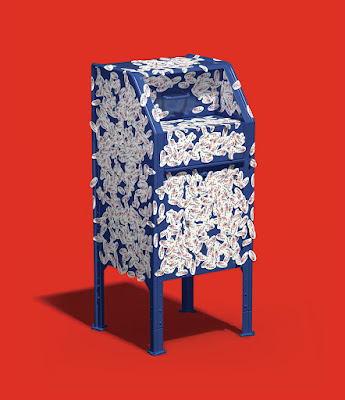 "I don't want everybody to vote," Paul Weyrich, the conservative activist and co-founder of the Heritage Foundation, said at a meeting in Dallas.

This statement by Paul Weyrich, a leader of the religious right, appears in an article that ran in The New York Times Magazine on May 10, 2020. The article, written by Emily Bazelon, is titled, "Can Democracy Survive The Pandemic?" That is the hard copy version of the title. Online, the article is titled, "Will Americans Lose Their Right to Vote in the Pandemic?"

Weyrich's statement, which was immediately offensive to me, was cited in the Bazelon article as a way to shock the reader. At least, I think that is why it was included. This statement, however, taken by itself, taken at face value, is actually a pretty realistic evaluation of the way that most of those involved in actual political campaigns think about voting.

Getting more votes than an opponent is how to win. If you are committed to winning, why should  you want the supporters of your opponent to come out and vote? Clearly, you hope they won't!

In real world politics, with which I have some extensive experience at the local government level, much of the pre-election work of political campaigns is to identify supporters, so you can then mobilize those voters on election day. Your campaign will repeatedly call them, on election day, "bugging" them if they haven't yet voted, "bugging" them until they do! You may even provide transportation to the polls for those supporters who don't vote by mail, making sure they get there to cast the ballot you want and expect them to cast. No campaign of which I am aware, however, has ever provided rides to the polls for anyone whom the campaign thought might vote against the candidate or cause that the campaign was supporting.

Wikipedia, a fairly reliable guide to the world as it appears to the average person, doesn't even have an entry for the phrase, "Winning isn't everything." The Wikipedia entry is for this statement:

Winning isn't everything; it's the only thing

Something is wrong when the only explanation for the "winning isn't everything" statement suggests that, in fact, winning is everything. My father and mother would not have approved!

Voter suppression, in fact, is a very practical way to make the "winning is the only thing" perspective work out in real life political elections. If the idea of voter suppression is offensive to you (as it is to me), then that must mean that you are more committed to maintaining the integrity of our democratic form of government than you are to making sure that your side will definitely win at all costs in the next upcoming election.

"Bad money drives out good money," says Gresham's Law. Bad politics drives out good politics. You can call that "Patton's Law," if you'd like. I think we can see it happening all around us.

Those wanting to make fundamental changes at the federal government level are going to have to win the next presidential election, but they are facing the Weyrich perspective at every turn. Voter suppression worked for President Trump last time around, and it appears that his reelection campaign has doubled down on voter suppression as a major campaign strategy in the upcoming 2020 election. As I noted yesterday, it appears that the President even wants to get rid of the Post Office as a public institution! Think of that! Voting by mail won't even be possible if there isn't reliably available and universal mail service, and with a global pandemic likely to be in its "second surge" this election season, Weyrich's "I don't want everybody to vote" statement takes on a rather sinister meaning.

Any observer of what is happening, politically, would have to wonder, as Bazelon asks, "will Americans lose their right to vote in the pandemic?" The New York Times Magazine was certainly right in putting the question this way, in its hard copy edition: "Can Democracy Survive The Pandemic?"

If democracy is going to survive, we have got to stop bad politics from driving out the good. That means a much-increased engagement of ordinary people in our political process this November. There aren't any shortcuts!

POSTSCRIPT:
The use of the post office image that heads up Bazelon's column - the image I have reproduced above - reinforces the point I made in my blog posting yesterday!