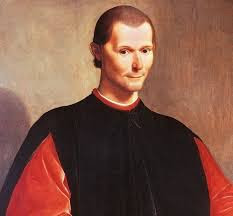 In case you don't immediately recognize him, that is Niccolò Machiavelli, pictured above. The image was gleaned from an article published by the Modern War Institute. That institution, located at West Point, was citing to Machiavelli's ideas about "innovation."

The Wall Street Journal recently referenced Machiavelli, too, in an article about how to rebuild our shattered economy. The article was titled, "Getting The Restart Right."

When the Great Restart begins, many leaders will fall back on an idea once espoused by Machiavelli, who wrote: “The great majority of mankind are satisfied with appearances, as though they were realities.” They will try to reduce the anxiety in the air by restoring familiar routines, procedures and traditions. The problem is that business, as we knew it, cannot be recovered. It will need to be reinvented.

I am inclined to think that the quoted observation by Machiavelli is accurate. Most people are focused  mainly on how things "appear," and are not, generally, willing to consider the possibility that the "realities" of our world are not necessarily what everyone thinks they are.

If there is going to be a "Great Restart," as we come back outdoors after the stay-at-home mandates imposed during the coronavirus, let's think about what has now been revealed as "appearance," and what has been shown to be "reality," when we contemplate our politics, society, and economy.

It has most usually "appeared" that what is most worthwhile, and significant, and valuable in our society is what is reflected in the lives, activities, and actions of those with the most access to financial resources - the 1%, to use that way of describing the yawning economic division that has elevated a very small number of persons to positions of immense wealth, while the great majority of the population has largely been considered to be background noise.

Turns out, doesn't it, that the "realities" are different from what "appeared" to be true? In fact, when ordinary people don't work, and don't participate in the production and consumption that is the life of our society and economy, the economy utterly fails and falls apart. Stock prices plunge, big businesses go bankrupt, and the entire economic apparatus no longer works.

So, if we are going to "get going again," our politics, our social relationships, and our economic arrangements cannot simply be "recovered." They will need to be "reinvented."

This means, among other things - at least the way I see it - that we will now have to admit that the "reality" of our situation is not that we are a bunch of individual persons (as it can so easily appear), but that we are "together" in this life. Our reinvented world must make sure everyone is provided with the basics, including food, shelter, health care, worthwhile employment, and education.

As the wealthiest society in the history of the world, we can make that happen. And in fact, the "reality" is, we have to make that happen if we want our politics, society, and economy to "restart," and thereafter to flourish and endure!