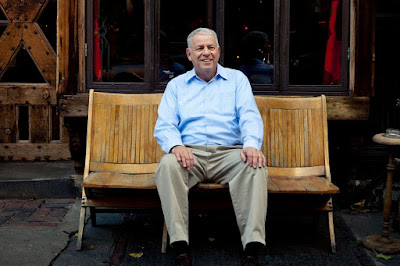 Knowing that the paywall erected by The New York Times can often frustrate anyone who may be trying to follow one of my links to an article in The Times, I have provided, below, the full text of the obituary of William Helmreich. Helmreich is pictured above. He was seventy-four years old when he died, a victim of the coronavirus. He lived in New York City.

As you will read in his obituary, Helmreich wrote a book entitled, The New York Nobody Knows. The book was based on the conversations that Helmreich had with ordinary New York City residents, as he walked every street in the City, which added up to a 6,000-mile hike. You can, of course, read the entire obituary, but here is the part that prompts this posting today:

“The New York Nobody Knows: Walking 6,000 Miles in the City” (2013), chronicled Professor Helmreich’s experiences over four years — and many pairs of Rockports — walking virtually every city block, all 121,000, totaling 6,163 miles. Chatting with strangers, he unearthed a cornucopia of colorful city sidelights; he even once approached members of the street gang the Bloods outside a Bronx housing project and asked them where he could buy one of their red jackets.

This is how he explained his disarming technique to the comedian Barry Mitchell for a YouTube video:

“I just say, ‘What’s that horse doing in that guy’s backyard?’, or, ‘Is this neighborhood dangerous? Can I get a good apartment for my son?’ In other words, I just start talking to people.”


Right this very instant is probably not the best moment to undertake similar adventures in your own hometown. "Social distancing" is not only wise, it's the law. However, when social distancing requirements are behind us, let's all think about what a good idea it would be if we all did more walking around, interacting with the people in neighborhoods that are not our own. Helmreich gives us the secret: "just start talking to people."

I have a very strong hunch that Helmreich's technique, if liberally applied, could provide a "talking cure," and a "walking cure" for most of what afflicts our life together. If more of us were willing to "just start talking to people," people we "don't know," I think that fact, alone, would do a lot to revive our sense of community, which is the basis upon which our democratic political process must ultimately rest.

William Helmreich, Sociologist and a Walker in the City, Dies at 74

A scholar of Judaism as well, he walked every block in New York — totaling 6,163 miles — and wrote a book about his odyssey. He died of the coronavirus.

This obituary is part of a series about people who have died in the coronavirus pandemic. Read about others here.

When William B. Helmreich was 9 years old, his father, a Polish-Jewish refugee from the Nazis who was curious about his latest haven, New York City, started taking him on weekend outings that he playfully called “Last Stop.” Father and son would choose a subway line at random, take it to the end and spend a few hours exploring the novelties of neighborhoods they had never seen.

Those adventures enlivened several years of the 1950s for young Mr. Helmreich and were in part the germ of two of the 18 books he would write or edit as a longtime professor of sociology and scholar of Judaism.

The first of the two, “Against All Odds: Holocaust Survivors and the Successful Lives They Made in America” (1992), was a data-driven study that highlighted the survivors’ resilience and achievements and contradicted the commonplace image of them as irremediably traumatized.

The second, “The New York Nobody Knows: Walking 6,000 Miles in the City” (2013), chronicled Professor Helmreich’s experiences over four years — and many pairs of Rockports — walking virtually every city block, all 121,000, totaling 6,163 miles. Chatting with strangers, he unearthed a cornucopia of colorful city sidelights; he even once approached members of the street gang the Bloods outside a Bronx housing project and asked them where he could buy one of their red jackets.

This is how he explained his disarming technique to the comedian Barry Mitchell for a YouTube video:

“I just say, ‘What’s that horse doing in that guy’s backyard?’, or, ‘Is this neighborhood dangerous? Can I get a good apartment for my son?’ In other words, I just start talking to people.”

A distinguished professor of sociology at City College and the City University of New York’s Graduate Center, he died on Saturday at his home in Great Neck, N.Y. He was 74. His son Jeffrey said the cause was the coronavirus.

Curious, gregarious and inexhaustibly energetic, Mr. Helmreich was fearless in his study of human beings. As a graduate student at Washington University in St. Louis, he chose to do his dissertation on a group of black-power advocates who were hostile toward white people like him, even once getting into a tussle with one of its members. In 1973, the study was turned into his first book, “The Black Crusaders: A Case Study of a Black Militant Organization.”

Although for a time he helped organize the annual parade in Manhattan celebrating Israel, he conducted a two-hour interview in 2003 in Gaza with a leader of Hamas, Dr. Abdel Aziz Rantisi, who had just survived an attack by Israeli helicopters.

The book of his that broke important new ground was “Against All Odds.” In writing it he interviewed 380 Holocaust survivors and found that, far from the pathological stereotypes surrounding them, they had more stable marriages, equivalent economic status and a lesser need to seek psychiatric help than other American Jews of the same age.

He argued that traits like adaptability, tenacity and resourcefulness, which had been needed to endure near starvation, terror and the loss of so many loved ones, had enabled most survivors to flourish in the freedom and opportunities that America afforded. The book won an award from the Jewish Book Council.

What made his ramble through New York so beguiling — besides the sheer feat of his feet — were the serendipitous encounters and discoveries of offbeat corners of city life. In Bensonhurst, Brooklyn, he met a man whose ample garage was chock-a-block with old Dodger baseball uniforms, carousel horses, gaudy amusement arcade machines and vintage cars — all as a wistful homage to the Brooklyn of his childhood.

In Gowanus, Brooklyn, he came across a long-dormant grocery on a street of rowhouses and found that it that had been kept as a shrine by the descendants of a Neapolitan immigrant who had opened the business a century before, its Rheingold and Schaefer beer neon signs flashing at Christmastime in tribute.

William Benno Helmreich was born on Aug. 25, 1945 in Zurich. His parents, Leo and Sally (Finkelstein) Helmreich, had met in Nazi-occupied Belgium and had spirited their way through France into neutral Switzerland. In 1946 the family emigrated to the United States, where his father worked first repairing diamond jewelry and eventually became a diamond dealer.

Settling on the Upper West Side of Manhattan, his parents sent red-haired Willie, as he was known, to Manhattan Day School, a modern Orthodox yeshiva, where teachers noticed his strong tenor voice and had him star in the annual Purim play. (Among his many adult diversions, Professor Helmreich sometimes served as a supplemental cantor.)

He reflected on his mixed feelings about his childhood education in a memoir, “Wake Up, Wake Up to Do the Work of the Creator” (1977), and later studied more advanced yeshivas in “The World of the Yeshiva: An Intimate Portrait of Orthodox Judaism” (1982).

He attended Yeshiva University before doing graduate work at Washington University. As a professor at City College, he could be a riveting teacher, known for provocative interchanges with students and a near photographic memory. Professor Helmreich was the college’s longtime chairman of sociology, writing books on the Jews of Philip Roth’s Newark and the truths and distortions of ethnic stereotypes as well as follow-up walking guides to, separately, the streets of Brooklyn, Manhattan, Staten Island and Queens.

In addition to his son Jeffrey, an assistant professor of philosophy and law at the University of California at Irvine, Mr. Helmreich is survived by his wife, Helaine Helmreich, a speech therapist who wrote a well-received novel, “The Chimney Tree”; another son, Joseph, a writer; a daughter, Deborah Halpern, a speech pathologist; and four grandchildren. A third son, Alan, died of a brain aneurysm in 1998 at the age of 24.

Learning of Professor Helmreich’s sudden death, Jonathan Sarna, professor of American Jewish history at Brandeis University, said: “He was in the wrong profession for the coronavirus. Willie loved talking to people. Social distancing was not in his nature.”