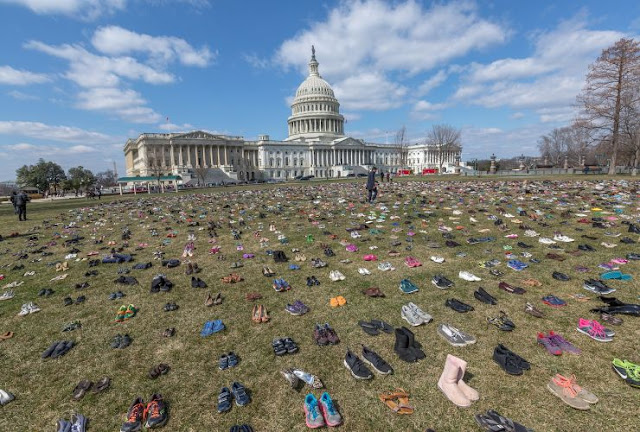 I subscribe to a lot of Internet newsletters and related bulletins. I do that just to keep up with what's going on in this "political world" of ours. One of the bulletins I regularly receive is from Boston Review, a "political and literary forum." Boston Review might be of interest to some of those who will read my blog posting for today. If you think you might be one of them, just click this link and you can sign up for your own, direct delivery!

The picture above was chosen to illustrate a Boston Review article called, "Body Politics." Here is how that article begins:

On a hot day in March 1990, some sixty protesters organized by Americans Disabled for Accessible Public Transit (ADAPT) hurled themselves out of their wheelchairs, threw aside their crutches, and dragged, pushed, or crawled up the eighty-odd steps of the U.S. Capitol.

The Capitol Crawl was one of the most brilliant acts of political theater in U.S. history. It was both a literal and a symbolic enactment of the inaccessibility of the workings of democracy to people with disabilities, as well as their indefatigable will to win their rights. It showcased both the vulnerability of the body and the power of resistance—indeed, the power of bodies in vulnerability. And it worked. Four months later, President George H.W. Bush signed the federal Americans with Disabilities Act (ADA).

The Capitol Crawl is the climax of the new documentary Crip Camp by Nicole Newnham and James LeBrecht. The film chronicles the U.S. disability rights movement, from its fetal stage in the mid-1970s at a hippie summer camp for “handicapped” teenagers to its maturity and pinnacle achievement (so far), the passage of the ADA. It’s an organizer’s primer. But watching from my couch, isolated and immobilized by the pandemic lockdown, what struck me most about the film was the salience of the body to social movements

Judith Levine, the author of "Body Politics," goes on to discuss how difficult it is to put together an effective demonstration during the current coronavirus crisis, since "with COVID-19 we are faced with a contradiction: collective action never looked or felt more compelling, yet mutual care requires that we stay apart."

The problem, as Levine diagnoses it is as follows:

In a crisis characterized by isolation, the most encouraging acts of political resistance are coming from workers endangered by proximity. They show us what every activist or student of social movements understands: bodies in the street—or corporate headquarters or nuclear power plant—play an irreplaceable role in destabilizing the status quo.

Levine, in other words, wants us to think about what "solidarity look[s] like when our bodies cannot come together, in public, to agitate for a better world." Shoes left on the ground, to "stand in" for the bodies which would normally be wearing them, are certainly one example! She offers others, as well.

In the end, however, as I read the article, Levine is clear that separate, isolated, and individual actions, as opposed to collective actions, aren't going to do what needs to be done. She cites to Malcolm Gladwell, among other sources, to make that point. I would refer you to Zeynep Tufekci,  as well, and to her great TED Talk on this topic.

Let's not fool ourselves. There is going to be a need for significant, effective, collective action to restructure our political realities to meet the climate crisis and the end of the coronavirus lockdown. Get ready to think about occupying the local offices of political officeholders. They are a lot closer, and easier to get to, than the fields surrounding the Capitol Building!