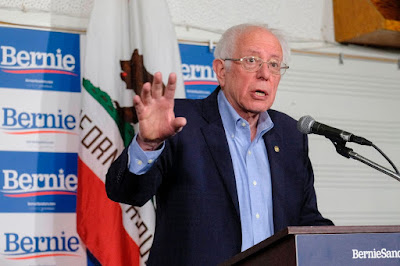 Sanders has work to do. He has some very real hurdles to clear. And it will not be easy. His opponents would use every instrument at their disposal during a general election to tar and feather him. But, all that stated, I still wouldn’t doubt his ability to win. There is a very real desire for real change in this country. It would be a mistake to discount it.

Terry Sullivan, writing in The Wall Street Journal, agrees with Blow. Sullivan was Marco Rubio's campaign manager in Rubio's run for the presidency in 2016. Here is what he thinks:

Mr. Sanders ... isolates his target group, demonizes it, and relentlessly attacks. Sound familiar? Replace billionaires with illegal immigrants and throw in a huge helping of the “mainstream media is unfair to me,” and you have a perfect match. Mr. Sanders is exploiting the same sentiments that Mr. Trump rode to the presidency on in 2016 ... The funniest part of this blockbuster sequel may be that if Mr. Sanders does win the nomination, those same pundits and politicos will swear he can never win in November. I learned enough from 2016 not to make a definitive political prediction this far out about the final outcome. Maybe we’re watching “Groundhog Day.”

I want to make clear that this is not a column urging Democrats to return to Clintonian centrism. I’m making a different case — that the left is hurting its own ability to win elections and enact sweeping change, by insisting on an orthodox version of progressivism. To put it another way: Can you think of one way that Bernie Sanders is signaling respect to voters outside of his base?

Sanders has evidently decided that progressives will no longer accept impurities — or even much tactical vagueness. He, along with Elizabeth Warren, has embraced policies that are popular on the left and nowhere else: a ban on fracking; the decriminalization of border crossings; the provision of federal health benefits to undocumented immigrants; the elimination of private health insurance.

For many progressives, each of these issues has become a moral litmus test. Any restriction of immigration is considered a denial of human rights. Any compromise on guns or health care is an acceptance of preventable deaths.

And I understand the progressive arguments on these issues. But turning every compromise into an existential moral failing is not a smart way to practice politics. It comforts the persuaded while alienating the persuadable.

F.D.R. and Reagan understood this, as did Abraham Lincoln and many great social reformers, including Frederick Douglass, Jane Addams, Martin Luther King Jr. and Cesar Chavez. Strong political movements can accept impurity on individual issues in the service of a larger goal: winning.

As a strong supporter of Bernie Sanders, I want to say that I am not the kind of progressive who wants to stake out my positions on policy as some kind of "moral litmus test." I am not at all convinced that Sanders is doing that, either, but to the extent that Bernie Sanders may be tempted to do so, I do think that the lesson I "Learned From An English Teacher" is worth thinking about. As I read it, Leonhardt is saying that an appropriate "concession" can often be the best way to win an argument.