#100 / Learn A Lesson From The Laughing Rats 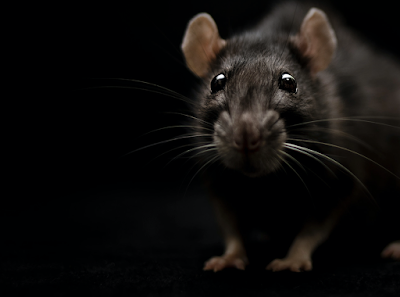 The article with this provacative title notes that rats can laugh. Who knew that? Well, I didn't, anyway. It turns out, in fact, that there are a lot of things about rats that I didn't know. Here is a quick summary, from the article, of some of those things:

In the late 1990s, Jaak Panksepp, the father of affective neuroscience, discovered that rats laugh. This fact had remained hidden because rats laugh in ultrasonic chirps that we can’t hear. It was only when Brian Knutson, a member of Panksepp’s lab, started to monitor their vocalisations during social play that he realised there was something that appeared unexpectedly similar to human laughter. Panksepp and his team began to systematically study this phenomenon by tickling the rats and measuring their response. They found that the rats’ vocalisations more than doubled during tickling, and that rats bonded with the ticklers, approaching them more frequently for social play. The rats were enjoying themselves. But the discovery was met with opposition from the scientific community. The world wasn’t ready for laughing rats.

That discovery was just the tip of the iceberg. We now know that rats don’t live merely in the present, but are capable of reliving memories of past experiences and mentally planning ahead the navigation route they will later follow. They reciprocally trade different kinds of goods with each other – and understand not only when they owe a favour to another rat, but also that the favour can be paid back in a different currency. When they make a wrong choice, they display something that appears very close to regret. Despite having brains that are much simpler than humans’, there are some learning tasks in which they’ll likely outperform you. Rats can be taught cognitively demanding skills, such as driving a vehicle to reach a desired goal, playing hide-and-seek with a human, and using the appropriate tool to access out-of-reach food.

The most unexpected discovery, however, was that rats are capable of empathy (emphasis added).

I hate to take what some might conclude is a cheap shot, but don't you sometimes wonder whether human beings are capable of empathy? Empathy is not something that is at all times and universally evident among us, and perhaps it is particularly and conspicuously absent inside the world of electoral politics, where a lot of us are spending our time, these days.

Online discussions about politics are particularly revealing with respect to the need to recapture empathy as an essential element in our human interactions. See my blog posting about how I met a "troll." I was trying, in writing about my experience, to provide a reminder that many of us succumb to the temptation to be totally unempathetic when faced with political statements with which we disagree, whether those statements come to us online or off.

Aeon got me thinking about empathy! There is also another thing I started thinking about after reading the Aeon article on the laughing rats. The article comes headlined with a question:

Rats are sentient beings with rich emotional lives, yet we subject them to experimental cruelty without conscience. Why?

The answer to this question, "Why?," is almost certainly related to that empathy thing, but I think the phenomenon is also related, and perhaps above all, to the human sense that we are entitled to do whatever we want to do, inside the World of Nature, and that all of the Natural World actually belongs to us.

The facts of the matter, of course, are quite to the contrary. We are actually "creatures" within the World of Nature, just like the rats! How we got here is mysterious, and we don't think about that very much. What we do think about is what we want. In fact, we have concluded, since we have unparalleled power to alter the Natural World, that our desires and projects should be the only things that matter. Rats die and trees are clearcut to the ground. Empathy is not driving our projects.

Bob Dylan has a song that touches on the subject. Click right here to listen. Here are the lyrics that came to my mind when I read that story about the laughing rats. These are the words I thought about when I asked myself the question posed with the article: Why? I think Dylan has the answer:

Man thinks, 'cause he rules the earth,
He can do with it as he please
And if things don't change soon, he will
Oh, man has invented his doom
First step was touching the moon

Now, there's a woman on my block
She just sit there as the night grows still
She say who gonna take away his license to kill?

Rats will laugh, for sure (and the whole Natural World will laugh with them), if human beings can ever learn about an empathy that includes the whole world. Things will be good, everywhere, if we can learn about empathy in time to avoid our doom. We could begin with that lesson taught by the rats. They've got empathy; why not us?

When we really learn that lesson about empathy, when we learn it down to the ground, we are all going to hustle on down to City Hall, as fast as we can. We are all going to want to turn in our license to kill!