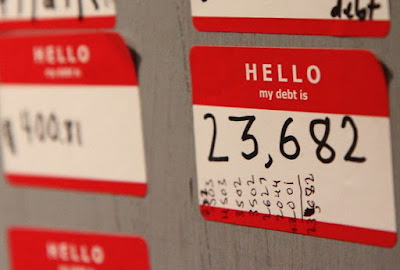 A relatively recent article in Boston Review is titled, "Debtors of the World, Unite!" I commend this article to you. I don't think it is behind any paywall, so just click the link.

If you agree that the massive income and wealth inequality that prevails in our society must be overcome, then it is worth thinking about how we might do that. One way would be by excusing the repayment of some or all of what is generally called "consumer debt."

If we think only in terms of "individuals," of course, if the "individual" is the only "unit of analysis" we decide is relevant with respect to political, economic, and social questions, then the idea that we should excuse from their repayment obligations those individuals who spent borrowed money in the past seems truly outrageous and unfair. Lots of us don't have that kind of debt. Why should others have their debts forgiven?

From the "individual" perspective, that is a very pertinent question, but if we think about things from a "collective" perspective, by which I mean that we recognize that we are all "together in this life," then we swiftly recognize that if we allow large numbers of individuals to lose everything, in the name of what is "fair," then we are all going to lose. From this perspective, the mechanism of debt forgiveness might begin to seem more reasonable, and attractive.

So, let's base our first approach to the issue on an analysis of the self-interest of those whose ability to survive isn't threatened by any individual debt of their own. When we do that, we can see that it remains true that if a large enough number of individuals are wiped out economically, the overall economy and society will start failing, and when that happens, everyone is affected. It is in our own self-interest, in other words, to make sure that we don't allow wealth and income inequality to destroy the economy that supports us all, and that helps maintain the social stability that we all count on. We are getting to the point where the overall economic and social stability of our society is in jeopardy. At such a juncture, the "fairness" of debt forgiveness might not be the most important thing to think about.

It is also possible to take on the "fairness" argument head on. Those who are now being crushed by overwhelming consumer debt, did, by spending that borrowed money in the past, help buoy and promote an economy that disproportionately benefitted those who are now at the very upper end of the economic pyramid that has siphoned most of the wealth and income to the very top, leaving the bottom far, far behind. Looked at in that way, debt erasure now is a way to redistribute and rebalance a very severely unbalanced economic system, in which those who have contributed by their labor and their consumption have benefitted others, much more than themselves.

However you want to look at it, if you think it is imperative to deal with the conditions of wealth and income inequality that are threatening our common life together (and they are), the idea that the Lord's Prayer might have some practical meaning in today's life is an idea worth thinking about.