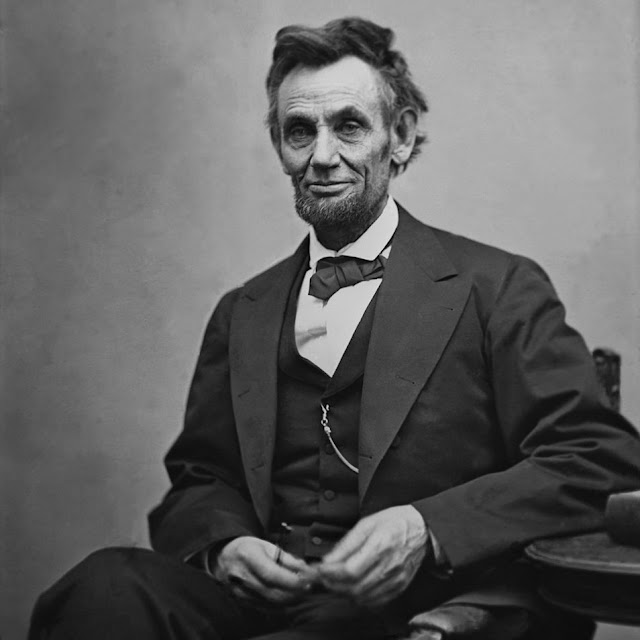 Rabbi Meir Soloveichik has written a very nice article for The Wall Street Journal. His title? "What the Bible Taught Lincoln About America."

Soloveichik demonstrates that the political language used by Lincoln, throughout his presidency, relied heavily on Lincoln's knowledge of the Hebrew Bible - the "Old Testament."

As hundreds of thousands of Americans died in the Civil War, the 16th president evolved into a theologian of the American idea, using the language and concepts of the Bible to reflect on the war’s larger meaning.

Reporting on Lincoln's travels from Springfield, Illinois to the nation's capital, after his election in 1860, Soloveichik provides this description of one speech Lincoln made along the way:

In Trenton, N.J., he gave a speech to the state senate in which he recalled reading as a child about George Washington’s battle for the city. “I recollect thinking then,” he reflected, “boy even though I was, that there must have been something more than common that those men struggled for; that something even more than National Independence; that something that held out a great promise to all the people of the world to all time to come.” It was his intention, Lincoln concluded, “to serve as a humble instrument in the hands of the Almighty, and of this, his almost chosen people."

I like the idea that Lincoln was, as president, a "theologian of the American idea." I also like that phrase, "almost chosen."

That "almost chosen" phrase, I think, provides a good perspective for those who are skeptical (as I am) about the claims that flow from a notion of "American exceptionalism," but who do believe (as I do) that there is something truly unique about this nation, at least in its possibilities.

"Exceptionalism" proclaims that America IS "chosen," and that the United States has both the right and the obligation to bring order to and regulate the world."

What is it, then, that was recognized (and perhaps even "revealed") in that "sacred hall" in which the Declaration of Independence was signed? Here is what Soloveichik says about Lincoln's answer to that question:

Lincoln traveled on to Philadelphia, where on Washington’s birthday he visited Independence Hall. While bidding good night to a crowd, Lincoln offered another impromptu biblical reflection: “All my political warfare has been in favor of the teachings coming forth from that sacred hall,” where the Declaration of Independence was signed. “May my right hand forget its cunning and my tongue cleave to the roof of my mouth, if ever I prove false to those teachings.”

The audience would have recognized Lincoln’s allusion to Psalm 137: “If I forget thee, O Jerusalem, may my right hand forget its cunning.” In the Bible, Jerusalem was the home of the Ark of the Covenant, the reminder of God’s promise to the Israelites. Independence Hall, Lincoln implied, was the American Jerusalem, and the doctrine that “all men are created equal” was the covenant of the “almost chosen people.” In the impending civil war, Americans’ dedication to that covenant would be tested.

That unfulfilled promise to the world, and to ourselves, the promise that all persons are "created equal," is the message that Americans are called upon not only to proclaim, but to achieve. We are, and I think correctly, described as an "almost chosen" people, because it is possible, for each one of us, individually, and for all of us, collectively, to choose whether to fulfill that promise, or not. The choice is not "of" us, as a people, but is "by" us as both individually and collectively.

And let us not forget that this "national purpose" is as much a challenge to us today as it was in 1776, or as it was in 1860. Actually, it is even a greater challenge, today.

In a time in which the continued existence of the whole world is in question, it is our calling to proclaim, and to achieve, the teaching that came from that "sacred hall" visited by Lincoln after his election. We are all together in this life, all the peoples of this Earth, and it is together, as human equals, that we will either gather our common strength and prevail against the forces of disintegration and destruction that we have launched against ourselves, or will do the opposite.

We are no "chosen people." It will be for us to choose, rather, whether we will succumb to the forces of division and disintegration that we ourselves have created, or whether we will come together, making real the mutual covenant made in our Declaration.

Let's not forget, we almost chosen ones:

We hold these truths to be self-evident, that all persons are created equal...

These words are still revolutionary, today. We will either heed them, and make them real, or we will "perish from this Earth."