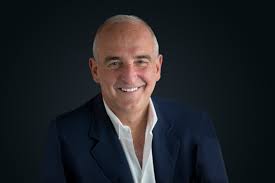 Roger Cohen, pictured above, is a columnist for The New York Times. I was struck by one of his columns, published in the January 11, 2020, edition of the newspaper. Cohen called the column "the memento mori of two friends." The column seems particularly appropriate right now, as we all lock down, shelter in place, and confront the coronavirus, and what it may portend.

Since I subscribe to The Times, a click on the link above will take me right to Cohen's column. Given the presence of The Times' paywall, though, I am not sure that others reading this blog posting will necessarily have the same experience. Thus, I am reproducing the column, in its entirety, below. The column is worth reading, and particularly, I think, if you know something about the two friends that Cohen memorializes: Sonny Mehta and Ward Just.

In fact, however, I am mentioning Cohen's column only to direct your attention to one specific statement, appearing in the second paragraph of the column. This is a lesson that we might all take to heart. The benefit of the words I cite do not depend on whether you subscribe to The New York Times, know anything about Cohen's two friends, or even whether you have read the column from which the following words are taken. There is much wisdom in these two sentences. If we can figure this out, we won't need much more:

Life is what we have. To give less than everything to it is dereliction.

Two Deaths and My Life

Samuel Beckett, when asked one beautiful spring morning whether such a day did not make him glad to be alive, responded, “I wouldn’t go as far as that.” Life is a predicament, death the elephant at the horizon that looms larger as the years pass.

Still, life is what we have. To give less than everything to it is dereliction. In the end its wonder is unimaginable without the presence of death. As the dew dispels, the mist dissolves, and the sap rises on a morning such as the one that did not quite win over Beckett, the force of life is unmistakable. That is what put us here in the first place.

Great souls resemble the elements in their immensity. They absorb everything — pain, injustice, insult, folly — and give back decency and kindness. They are not born of a piece. They come into being through unflinching confrontation with life’s spears. They reach quiet. Discipline is the backbone of graciousness. Stoicism is the other face of wounds. In the most beautiful smile, painful knowledge hovers.

Midwinter is not what prompted these reflections, although when a freezing wind whips off the East River all thoughts turn to refuge. No, the death in quick succession of two friends was the catalyst. They were older than me. But they were not old enough and not so distant in age that their memento mori feel less than urgent.

Sonny Mehta, who died last month at the age of 77, would caress the books he loved. For them he lived. He guided Alfred A. Knopf through more than three decades of rapid change. He was a complete publisher, eclectic in his tastes, ferocious in his will, guided by a mission to bring the finest books to Knopf and publish them only once editing had honed them to irreproachable form. Yet he wanted to be remembered above all as a reader.

I knew Sonny for three decades. He published my last two books. His civility never wavered. The twinkle in his eye never faded. His friendship was constant. Whisky and a cigarette and the meandering conversation that went with them were more his thing than the treadmill. He was a beautiful man.

How so? In his gentleness that contained wisdom, in his diffidence that contained enthusiasm, in his discretion that contained curiosity. You had to listen carefully, for he spoke softly, to the clues he offered. His long marriage to his wife, Gita, brought to my mind, in its respectfulness and vitality, Rilke’s phrase about love as protecting the solitude of the other.

A child of India, brown-skinned in what was when he started the white preserve of British publishing, once asked if he was perhaps seeking a job in the stockroom, Mehta never stooped to unkindness. His writers knew they had come home. He commanded the unswerving loyalty of the likes of Michael Ondaatje, Kazuo Ishiguro, Germaine Greer and Julian Barnes. “I feel that my heart has been ripped out,” Jon Segal, his longtime colleague at Knopf, told me.

When Mehta’s father, a diplomat, died in Vienna, Mehta found in his desk a folder with every article ever published about him. The pride of his father, who had never complimented his son, was evident. Remote fathers: vast subject. Hearing this story, I understood more of my friend’s elegant stoicism.

Earlier in December, Ward Just, a journalist who turned to fiction, a great Washington Post correspondent in Vietnam who became a great novelist, died at the age of 84. Like Mehta, he was a lover of Scotch. I had not seen much of Just since we became friends in Berlin 20 years ago, but his death hit me hard. I recalled him saying to me back then: “I was useless for journalism after Vietnam. I knew I was not going to do any better work.”

Truth, he decided, must be pursued elsewhere. “Many of the things that make you a good journalist have to be discarded to make you a good writer,” he said. “In a novel, every fact is a rock thrown in the hull, and the boat sinks a bit.”

Just probed the delusions of people and nations, and the damage they suffer. His prose was understated. In “A Dangerous Friend,” one character observes, “I have always believed that a mountainous ego resulted from an absence of conscience.” And that was before His Neediness seized the Oval Office.

As with Mehta, Just’s prodding was subtle, his smile contained sorrows, his wisdom was hard-earned, his constant humor wry. Wounded by a grenade blast in 1966, winched to safety by a chopper, he later wrote, as quoted in his Washington Post obituary: “When you got there, you said instinctively, I made it. And over and over again, Jesus Christ.”

I can hear my friend saying that, stress on the Christ. Life hangs by a thread. Pay attention to its ephemeral gifts. Of Truman Schockley, dead at 19 in Vietnam, Just wrote in 1967:

“Smoking a Lucky Strike and staring off into the mountains, Schockley died with a sniper’s bullet through the heart and stopped breathing before the cigarette stopped burning.”

Now there’s a perfect sentence that might even have persuaded Beckett. Spring passes. Truth distilled does not.