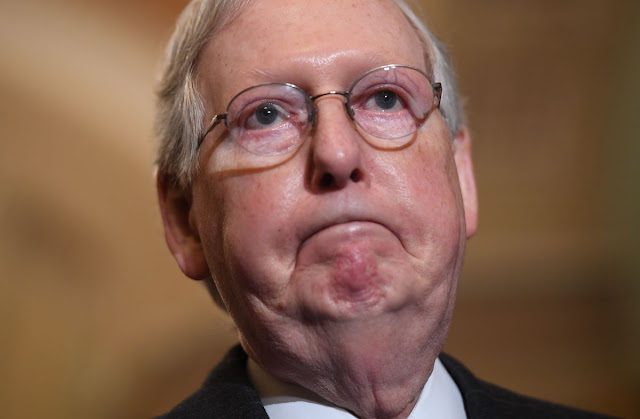 Mitch McConnell, pictured above, is a member of the Republican Party, and is a United States Senator for the State of Kentucky. He is currently serving as the Majority Leader of the United States Senate. McConnell is asking veteran federal judges to quit. If they do, the President and the Senate can then appoint and confirm, respectively, some younger and potentially more ideological judges, to serve in the place of the judges who resign, and by this means can preserve a rightwing stranglehold on the law.

Here's the problem: When the public understands that what the law says isn't really important, and that the only thing that actually counts is who says what the law says, then respect for "the law" goes out the window. Mitch's idea, in other words, is just one more step towards an authoritarian state. Any decent judge, Republican or Democrat, will certainly repudiate McConnell's suggestion. Judges want people to believe that "the law" is important, not which politician appointed the judge.

To some degree, of course, it is a fiction that the laws exist independently of our political life. They certainly don't. In fact, my "equation," or "formula," outlining the way I think government works (and should work), makes this absolutely clear:

We are supposed to be trying to create a government of "laws not men." That's our idea of how things are supposed to work. Generally, this idea of government is called "the rule of law." When we no longer believe that there is any such thing as the "rule of law," we are admitting that we live in a government of "men not laws," and this means that we are giving the all-clear sign to an authoritarian state, and even to dictatorship.

Let's explore this, just a little bit. If "Politics" does come before "Law" in the process that I contend determines how our "Government" works (and how it should work), then how is my idea any different from Mitch McConnell's?

Politics is the process that includes debate and discussion, conversation, controversy, and compromise. There are supposed to be different views (there are different views, and different interests), and the debate and the discussion is ultimately supposed to lead to a determination of which view or interest should prevail, and exactly how (to a vote, in other words), and a vote taken according to the rules established by the Constitution. It is "Politics," in other words, that ultimately results in the enactment of the "Law."

Law is a set of those written-down statements by which we tell ourselves what we think we should do. When we follow our own prescriptions (our own "laws," enacted as just described), we arrive at "self-government."

Government is the name we give to the way we have determined to arrange our affairs (determined, as stated above, by a political process that results in the enactment of our governing laws).

This process, as just described, presumes that "the law," the product of our political/legislative efforts, will be sufficient to define both rights and responsibilities with enough clarity that there is no question about what everyone is supposed to do. Of course, sometimes, the "laws" are not perfectly clear. As specific cases arise, and as people suggest that a particular "law" might contradict the fundamental constraints on government contained in the Constitution, it is necessary for there to be a process to determine what, in fact, "the law" actually requires, and whether "the law," in fact, is consistent with the Constitutional limits placed upon government.

McConnell's proposition assumes that the younger judges he wants appointed to replace existing judges will make different determinations about "the law" from the determinations now being made by the judges currently in place, and/or that it is important to maintain a particular ideological slant on the law into the future, even if the political process results in a new president making future judicial nominations. McConnell is basically telling everyone that the "letter of the law" is not what will determine how our government operates. To the contrary, McConnell is saying that what counts is who the judges are.

If we come to believe that "the law" really has no independent existence, separate from what judges say, and if we are willing to agree that the "law" isn't really what the legislative branch does, but that the only thing that counts in the final analysis is what non-elected judges decide the law should be, then we have admitted that we have a government of "men not laws."


This is NOT a good idea!