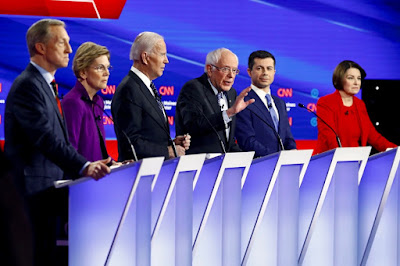 No one walks into the Oval Office and says, “Mr. President, you have sixty seconds to address the North Korean nuclear weapons program that has been active for 30 years and has bedeviled the last three presidents for all eight years of their respective terms. The clock starts now.” If we don’t want the Oval Office to operate like Twitter, why do we test our candidates as if it does?

The next Democratic Party Presidential Debate will take place in Phoenix on March 15th. The cast of characters from the last debate is pictured above, but it appears that the Phoenix debate will be a two-person event. You could even say a "two man" event and be absolutely accurate, since the Democratic National Committee has made clear that it doesn't want to have to deal with the likes of Tulsi Gabbard.

Tulsi Gabbard is still running for president, and she has two delegates. If her name were Bloomberg, she would have been included in the Phoenix debate, using the rules that allowed Bloomberg a spot in the two earlier debates. However, the Democratic National Committee has decided to change the rules. After Super Tuesday, it became clear that the rules they had been using before, which put Michael Bloomberg on the debate stage, would now give a spot to Tulsi. Apparently, the DNC does not want that.

In Phoenix, Joe Biden and Bernie Sanders will apparently face off, one on one.

The quote at the top of this posting is from Greta Van Susteren, who is the anchor of Gray TV’s “Full Court Press” and Voice of America’s “Plugged In.” In a recent column in The Washington Post, from which I took the quote, Van Susteren suggests that there is a better way to run presidential debates. In short, Van Susteren proposes that each of the candidates be given what amounts to a "take home exam," with the candidate's obligation being to present his or her answer in public, with news commentators on hand to quiz the candidates about the solutions they propose:

If I were a debate moderator, three days in advance, I would supply the candidates with a series of identical, fact-based problem scenarios. These scenarios would relate to real issues facing the United States — such as health care, infrastructure, Iran, North Korea, climate change or cyberwarfare. Candidates would consider how to respond to the scenario, they could consult with advisers and arrive at the debate with a (hopefully) workable solution. . .

Viewers would have the benefit of being able to compare candidates’ responses to the same scenario. And because the questions would not flit from subject to subject, there would be more ability to test the quality of candidates’ thinking. The presidential hopefuls would be required to describe how they had arrived at their approach, explain how it might be achieved and outline the potential consequences.

The role of the panelists would be to press the participants, politely but repeatedly, on the feasibility of their proposals. How do you get this done with a divided Congress? How will you pay for it? What if our allies refuse to go along? What constitutes an act of war? In addition, candidates would have the chance to question rivals about their proposed solutions, giving viewers insights into how the candidates think on their feet and the depth of their analyses.

I think that such a format might have some benefits. This could be, as Van Susteren argues, a "better way" to run these presidential debates. However, I bet it would be boring! Since television is all about "entertainment," I doubt we can expect any network to try out Susteren's idea any time soon. I do, however, want to applaud one of Susteren's observations, highlighted in the quote at the top of this blog posting:

Given recent experience, I think it is manifestly obvious that we do not "want the Oval Office to operate like Twitter."