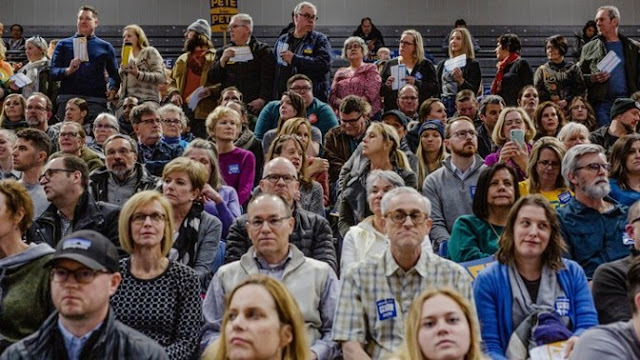 The news stories following the Iowa caucuses have frequently used the words "disaster," and "disastrous," to describe the inability of the Iowa Democratic Party to provide prompt and accurate voting results to the public. The following headlines are examples:

Trump is using the 'unmitigated disaster' of the Iowa caucuses to troll Democrats and say the only person who can claim victory is him.

As I canvassed the news about what happened in Iowa (with a total vote count still not available), I paid particular attention to a discussion found in a bulletin published by The Atlantic. While The Atlantic did not use the word "disaster," or "disastrous," one of the headlines in the article did highlight a pertinent question:

There was an app for that. Did there need to be?

Counting votes at a political caucus doesn't actually require any kind of internet connectivity. At a time when everyone is aware that the Internet is now an arena for political "hacking," deciding to base the vote count on an unnecessary "app," instead of using an ordinary sheet of paper, would seem to be contraindicated. Conspiracy theories have abounded, and frankly, there seems to be some justification for thinking that the particular "app" utilized in Iowa did originate with those who had a particular political agenda to pursue.

That question aside, I would like to propose that we think about the Atlantic's question in a more general way. I want to suggest, in fact, that the question highlighted above has some applicability far beyond the question of whether we need "apps" as we take part in politics. More and more, we are being invited to participate in life by way of one "app" or another, as though we need an "app" to be able to interface with real life. Banking, shopping, meeting the partner of your dreams. Don't you worry, "there's an app for that."

Almost always, as The Atlantic is suggesting, there actually "doesn't need to be!" All these "apps" don't really empower us, so much; they empower those who design and run the "apps," which track and catalogue our every move, our every thought.

I am thinking that it is probably time for a new organizing effort:

People For An App-Free Future


When I find out where to sign up, I'll let you know!