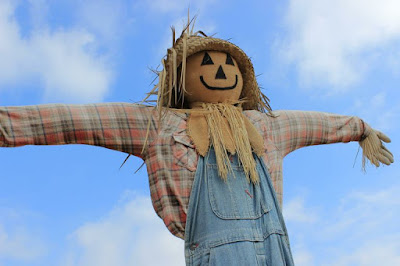 "I Was Once a Socialist. Then I Saw How It Worked."

I have reproduced, above, the title of one of David Brooks' recent columns in The New York Times. I hunted down that "Straw Man" photo to go along with my reference to the column, since that image seems so appropriate. The Straw Man is happy to embrace what Brooks is peddling. It's that SMB thing I have talked about before. "So Much Bullshit."

In the context of our contemporary politics, Brooks' column is (as he intended it to be) an attack on the presidential candidacy of Bernie Sanders. To some degree, the column is also an attack on the candidacy of Elizabeth Warren, even though Warren has gone out of her way to proclaim her adherence to the "capitalist" philosophy espoused by Brooks.

I am not very much of an "-ism" guy, and I am not calling out Brooks so much to defend "socialism" as against "capitalism," but rather to protest the intellectual dishonesty I find in the column I have linked.

Bernie Sanders calls himself a "Democratic Socialist." So far, that title has not scared off all of those red-blooded American patriots who should know, Brooks seems to believe, that "socialism" is the ultimate evil. Young people, particularly, seem not to be afraid of the label. Brooks is trying to reignite the fears of decades past, when the "Red Scare" informed American politics. One of the leading apostles of the Red Scare was Senator Joseph McCarthy, a person with a lot in common with our current president. Like President Trump, McCarthy had an extraordinary propensity to lie. And both McCarthy and our current president were served by, and revered, the same attorney, Roy Cohn.

Brooks knows that his column is not a neutral analysis of the pros and cons of socialist economic policy. It is an anti-Sanders piece, which would be fair enough, if it weren't based on "straw man" rhetoric designed to mislead and confuse Brooks' readers.


Brooks identifies Sanders' "socialism," which Brooks deplores, with "planned economies — the common ownership of the means of production." Brooks says that this kind of an economic structure  would "interfere with price and other market signals in a million ways," suppressing or eliminating "profit motives that drive people to learn and improve."

Sanders has never called for a transformation of our economy into a "planned economy," suppressing or eliminating the profit motive. He has, even more clearly, never urged the "common ownership of the means of production."

The kind of Democratic Socialism that Sanders urges is "socialism" as "social justice." His political program aims at the "billionaire class," and urges greater income and wealth equality in our nation. This is something quite different from urging a centrally-planned economy and the "common ownership of the means of production."

Like I say, I am not an "-ism" guy, so I am not allergic to labels. I look to the contents of the package being proferred, not the straw packaging that may surround it. Social justice? I am for it! "Common ownership of the means of production?" I am against it.

That's where Bernie Sanders is, too, and Brooks' efforts to imply the contrary are what logicians call a "straw man argument." It is what I name, again, as intellectual dishonesty and SMB!