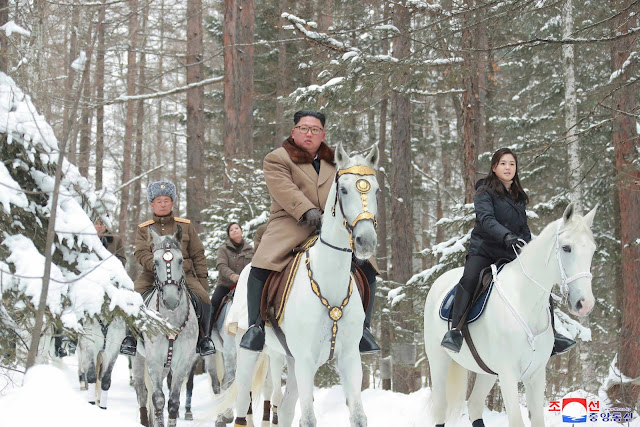 Pictured is Kim Jong-un, the leader of North Korea. His recent ride to the summit of the country’s sacred, snow-covered Mount Paektu, depicted above, was obviously intended to send a message.

In the West, the "Man on a White Horse" myth seems to originate in the Book of Revelations. Here's Chapter 19, Verse 11:

Now I saw heaven opened, and behold, a white horse. And He who sat on him was called Faithful and True, and in righteousness He judges and makes war.


That's where we got the idea! The righteous warrior who leads us to victory? That's our "Man on a White Horse," and the idea comes straight out of the New Testament.

Kim Jung-un does not really fit that New Testament picture. Kim Jung-un does not conform to the image I have in my mind. I wonder whether the people of North Korea see him as a "righteous warrior," either. According to The New York Times, the fact that Kim took this trip through virgin snow bodes ill for the kind of relationship we can expect with North Korea. Just in case anyone thought that our president was about to resolve the animosity between the United States and North Korea, this trip appears to signal the opposite. That's what The Times says, anyway.

I'd like to suggest that this recent appeareance of the "Man on a White Horse" symbol should make us reconsider the concept in its entirety. Kim Jung-un just doesn't fit the bill, and neither does Donald J. Trump.

Instead of waiting around for that always-hoped-for and never-actually-seen "Man on a White Horse," I suggest we take control of our politics and future for ourselves.

"Do It Yourself," after all, is the democratic way!