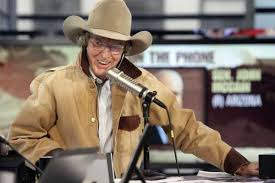 Pictured above is Don Imus, who died on December 27, 2019. Imus was a "disc jockey" who was "made [and] betrayed by his acid tongue." That's what the headline said in the hard copy version of the San Francisco Chronicle that hit my front lawn on Saturday, December 28th. Online, the headline reads a bit differently: "DJ Don Imus, made and betrayed by his mouth, dead at 79."

According to the article, Imus made Time Magazine's 1997 list of the 25 most influential Americans, but he was thrown off the air ten years later, in 2007, when he described a women's college basketall team as "nappy headed hos."

I never listened to Don Imus, but I did know his name. Based on descriptions only, and not on direct experience, Imus seems to have had a lot in common with a president I know. Besides the same first name, I mean!

When we model our online discourse on people who employ outrageous statements as a way to be entertaining, and to generate a personal commitment to themselves, at the expense of whomever they may be ridiculing or disparaging, we are, like Don Imus (and that other Don), being betrayed by our own mouths.

The disease is catching, in case you haven't noticed. I have even seen a bit of it on my Facebook page.

The New Year is just getting underway. It's not too late for a New Year's Resolution. Going forward, let's see if we can find a way to "disagree" without being "disagreeable." Let's make sure that our own statements don't follow bad examples, and that we don't betray ourselves with our own mouths!