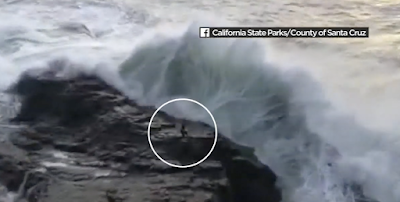 Many of my friends and neighbors around the Monterey Bay Region have seen the video clip, below, showing a man being swept into the ocean at Bonny Doon Beach, in Santa Cruz County. He was there on the rocks, apparently, despite the many warnings, found in the media, that advised people that they should avoid exactly the situation in which this man placed himself.

This recent incident has been widely reported in the local media, including on social media, and the "good news" is that the man pictured, and shown being swept away by a wave, was almost miraculously rescued by Park Rangers, and survived. Watch the video, if you haven't seen it. This is one lucky guy:

I have a habit of turning specific examples into generalizations, the better to absorb the lessons that are, perhaps, being imparted by what we see happening in the world. Rather than thinking about this incident in terms of the one individual who ignored Nature, and nonetheless survived, I tend to think of it as an illustration of a more global truth.

We, human beings, continue to think of ourselves as the Masters of the Natural World, no matter how many warnings we get to the contrary. We seem always to forget that we are, in fact, ultimately dependent on the World of Nature, whose power is so vast that it can never be properly evaluated by our human reason, or made truly subservient to human desire.

Should we be warned? We have been warned! Despite the warnings, we are still on the rocks, defying the waves. We are still pretending that the fires aren't coming for us: 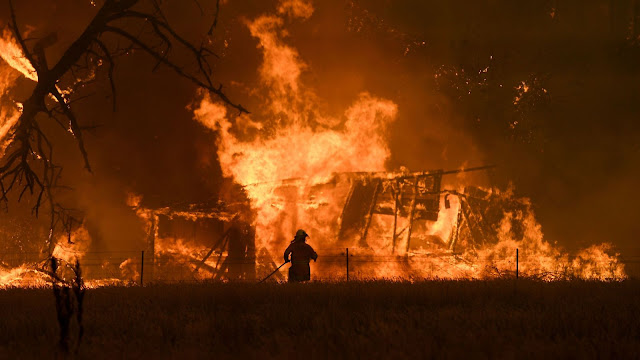